Doctors across hospitals in West Bengal as well as in many other parts of the country went on strike between June 12th-17th, to protest against the increasing insecurity faced by doctors at work.

Doctors across hospitals in West Bengal as well as in many other parts of the country went on strike between June 12th-17th, to protest against the increasing insecurity faced by doctors at work.

Following the death of a 75 year old cardiac patient at the NRS Medical College and Hospital in Kolkata on June 11th, the doctors at the hospital were brutally attacked, causing severe injuries to two resident doctors. Doctors in all government hospitals across Kolkata declared a strike from June 12th onwards, to protest the attack on the doctors and to once again press for their long-standing demand that the government and hospital authorities should provide adequate security for the doctors working in the hospital. The striking doctors appealed to the doctors’ associations across the country, to come out in support of their struggle. 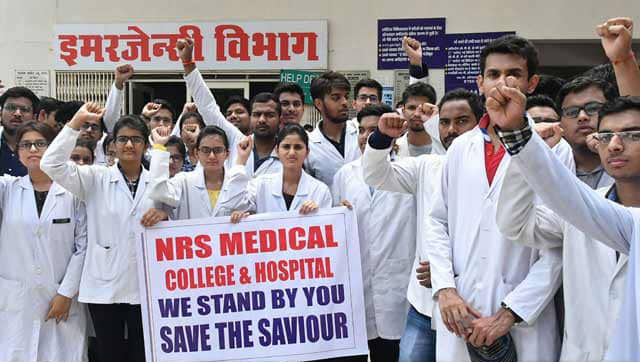 ​The strike call by the doctors in Kolkata drew immediate and widespread response. More than 400 doctors of government hospitals and medical colleges of Kolkata submitted a mass resignation letter to the health authorities and the Chief Minister.

According to news reports, doctors of AIIMS, Maulana Azad Medical College and Safdarjung Hospital in New Delhi observed a strike on 14thJune. Resident doctors’ associations in all government hospitals and dispensaries, as well as in many private hospitals and clinics in Delhi and Kolkata held protest marches, dharnas and demonstrations. Similar actions by doctors were reported from Chhattisgarh, Maharashtra, Andhra Pradesh, Uttar Pradesh, Tamilnadu, Punjab and many other places. Doctors of MCD hospitals in Delhi observed a strike on 15th June.

During the protest actions, doctors appealed to the public and media to understand the difficult conditions in which they are forced to work in the majority of public hospitals throughout the country. The number of doctors is very small, totally inadequate compared to the thousands of patients that throng the OPDs and emergency services every day. Doctors often have to work for 10-12 hours at a stretch or in continuous shifts. Hospitals lack adequate number of beds, operation theatres, oxygen cylinders, essential medicines and other equipment and services, severely hampering the work of the doctors. Doctors attending to particular patients have to themselves inform the family members in case of failure of treatment or death of patient. In such situations, the doctors are completely vulnerable to all kinds of abuses and physical attacks. They are left to fend for themselves, with the hospital authorities or police providing no security for them.

The increasing privatization of health services is leading to the systematic neglect and destruction of the government hospitals, worsening the working conditions of the doctors. On the other hand, private hospitals run by some of the biggest health-care monopolies are flourishing across the country, fleecing the patients, with no accountability whatsoever.

While the TV media highlighted the difficulties faced by patients in various places as a result of the strike, the conditions which led the doctors to go on strike were largely not highlighted.

Though OPD services and registration of new patients were generally closed during the days of the strike, the doctors demonstrated their responsibility towards the society in different ways, even as they protested. Doctors in AIIMS attended to the patients in the OPD wearing blood-stained head bandages and helmets on their heads, as a mark of protest. Patients who had been registered or admitted before the strike call were attended to by the doctors working in shifts. In some Kolkata hospitals, doctors attended to patients in the OPD without charging any fees, to mark their protest.