The protest was organised under the banner of All India Peace and Solidarity Organisation. 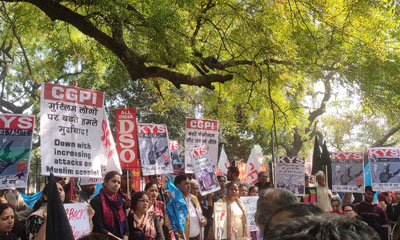 Some participants in the protest carried red flags and shouted the slogan of “Go back, Donald Trump Go Back!” Others held colourful banners and placards which read –“Down with the US-India Strategic Alliance!” “Long live the struggle for peace in South Asia!” “Halt the program of increasing militarisation and war! Down with US imperialism!” “Down with the increasing attacks on Muslims!” “Down with US imperialism – the source of terrorism worldwide!” and so on.

Many speakers addressed the protest meeting. Speakers condemned the growing interference of US imperialism in South Asia. With the military-strategic alliance between the Indian and American states, there is tremendous pressure from the US that Indian should buy the most modern and sophisticated weapons from US monopoly corporations that manufacture weapons, and that Indian defence system should completely align with US defence strategy. 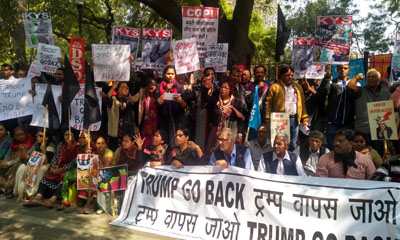 Indian ruling class, our biggest monopoly capitalists themselves harbour imperialist ambitions and it is a fact that they will be able realise these ambitions through an alliance with US imperialism. That is why the government has organised such a fantastic reception for Trump sidelining the interests of the workers and peasants. But the US is the world’s most dangerous war mongering power and fount of terrorism. This friendship with America spells increasing risk of war and terrorism for South Asia. All people of South Asia will pay dearly for this friendship with America.