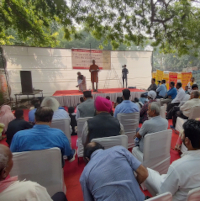 END_OF_DOCUMENT_TOKEN_TO_BE_REPLACED

Members and activists of communist parties and several organisations organized a joint action in New Delhi on 1st November 2017, to mark 33 years after the genocide of Sikhs and to reiterate their demand for punishment of the guilty.

END_OF_DOCUMENT_TOKEN_TO_BE_REPLACED

Call of the Central Committee of the Communist Ghadar Party of India, 24 October, 2017

On 1st November, 2017, men and women, old and young, people of all religious faiths, communists and other political activists, will march through the streets of Delhi, from the Supreme Court to the Parliament building, to mark the 33rd anniversary of the genocide of Sikhs in 1984. Through this united action, the people of India are declaring that they are not prepared to forgive or forget the monstrous crime committed 33 years ago. A message is being conveyed to the whole world that the people of India will not give up the fight for justice.