On 9th August 2021, a protest demonstration was organized in the call of central trade unions at Ghari check in Ambikapur in Surguja district of Chhattisgarh.

END_OF_DOCUMENT_TOKEN_TO_BE_REPLACED

Statement of the Central Committee of Communist Ghadar Party of India, 10 January, 2021

Our country and the whole world is witnessing the spectacle of an irreconcilable conflict between the Government of India and the vast majority of Indian people who belong to peasant and worker families. An unprecedented demonstration of mass protest has been going on at the borders of Delhi since November 26.

END_OF_DOCUMENT_TOKEN_TO_BE_REPLACED

The struggle of workers and peasants is a Dharm Yudh

Let us advance the struggle to defeat the rule of the Adharmis!

Call of the Central Committee of Communist Ghadar Party of India, 17 December, 2020

Peasants all over India are demanding that the farm laws recently passed by Parliament be repealed. Blocked by the police from entering Delhi, they are protesting at the borders of the capital. The protest sites are swelling as thousands more are joining every day.  Peasants have come from Punjab, Haryana, Uttar Pradesh and Uttarakhand.  They are coming from Rajasthan, Maharashtra, Madhya Pradesh and from other places hundreds of kilometres away.  Delegations have arrived from Andhra Pradesh, Karnataka, Tamilnadu and other states.  Workers’ unions and organisations of students, women and youth are all standing in solidarity with the Kisan Andolan in this struggle.

END_OF_DOCUMENT_TOKEN_TO_BE_REPLACED

After lakhs of peasants laid siege to the capital of the country and held their ground for 15 consecutive days, Government of India finally gave its written response to their representatives.  The Kisan Morcha has rejected the government’s proposed amendments to the already enacted pro-corporate laws.  All the constituent organisations have unanimously decided to further intensify their struggle, until these laws are repealed.

END_OF_DOCUMENT_TOKEN_TO_BE_REPLACED

Stop filling the coffers of the corporate houses!

Ensure secure livelihood and prosperity for all!

Statement of the Central Committee of Communist Ghadar Party of India, 5 December, 2020

Lakhs of peasants from Punjab, Haryana, Rajasthan, Uttar Pradesh and Uttarakhand have been camping in this harsh winter at the borders of the capital city of Delhi since 26th November. They are demanding their right to guaranteed procurement of their crops at Minimum Support Prices (MSPs).

END_OF_DOCUMENT_TOKEN_TO_BE_REPLACED 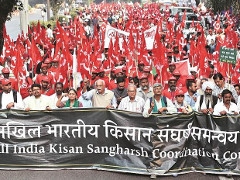 Peasants’ unions in Punjab have given a “Dilli Chalo” call on 26th-27th November. They are demanding that the central government immediately repeal the three anti peasant laws passed in September.