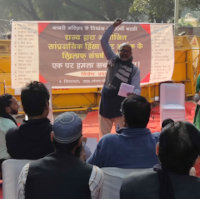 “Struggle Continues Against State Organised Communal Violence and State Terror!”, “An Attack on One Is an Attack on All!” These slogans inscribed on the main banner summed up the resolve of the people participating in a militant protest action at Parliament on December 6, 2022, on the 30th anniversary of the demolition of Babri Masjid.

END_OF_DOCUMENT_TOKEN_TO_BE_REPLACED

Protests actions have been taking place all over the country since August 15, when 11 people, convicted for the gang-rape of Bilkis Bano and murder of her family members in 2002, were released. Expressing their outrage, women and men from all walks of life have been participating in different kinds

END_OF_DOCUMENT_TOKEN_TO_BE_REPLACED

On 15th August, the 75th anniversary of Indian independence, 11 people convicted of gang-rape and murders during the Gujarat genocide of 2002 were set free.  They had been sentenced in 2008 with life imprisonment for the heinous crime of gang-raping a pregnant woman Bilkis Bano, and killing 14 members of her extended family.

END_OF_DOCUMENT_TOKEN_TO_BE_REPLACED

The ruling class is afraid of the prospect of the people of India uniting, overcoming religious and other differences, against their common enemy for a common goal. To prevent this from happening, it has perfected the method of unleashing state terrorism including state organised communal violence. At different times, it targets different communities. It carries out vicious propaganda against the targeted community, and then deliberately organises attacks on the community. It then spreads the lie that the people of different religious beliefs are killing each other.

END_OF_DOCUMENT_TOKEN_TO_BE_REPLACED

Those in power are to blame

Two weeks since the communal violence which took place in North East Delhi, those in power are trying their best to hide the truth. Many stories are being spread through the news media and social media, blaming one section of the people or another.