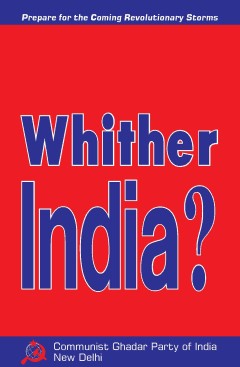 The report Whither India? was presented by Lal Singh, General Secretary of the Communist Ghadar Party of India, on behalf of its Central Committee, at the Third Consultative Conference of CGPI held in Delhi on December 23-24, 1995. The report was released for discussion in March 1996, by decision of the Third Consultative Conference. Subsequently the Central Committee adopted this report and the Second Congress of the Party, held in October 1998 considered it to be a major landmark in the work to establish the General Line for this period.