The British government has tabled a bill in parliament which will increase the powers of the police to attack protests of people for their rights and for justice. The bill is called the Police, Crime, Sentencing and Courts Bill.

The British government has tabled this bill in Parliament on March 15 at a time when there is a massive outrage amongst workers and working people against increasing police violence on people affirming their rights, or demanding justice. Most recently, police forces have brutally attacked a vigil organised by the people in memory of a young woman who was kidnapped and murdered in early March by a police officer.

Several protest demonstrations have been held across the country since the Bill was tabled in Parliament. The police have savagely attacked many of these protests.

Thousands of people marched in London, Bristol, Manchester and several other cities across the United Kingdom (UK) on 3rd April 2021, under the banner “Kill the Bill”.  In Bristol, more than 1,000 protesters gathered in the city and at one point a group marched up the main motorway and brought traffic to a standstill.

In London, thousands marched from Hyde Park to Parliament Square, where they held a meeting and denounced the Bill in their speeches. The police were deployed in large number to disrupt the protest, arresting more than a 100 protestors. People who refused to leave were arrested, and officers with riot shields and dogs attacked the protestors.

The Bill give police in England and Wales more powers to attack non-violent protests of people, on the pretext that they are too noisy or a nuisance, with those convicted liable to fines or jail terms. Police officers will have powers to disperse demonstrations through imposing time and noise limits. As of now, the police use a public order legislation (the Public Order Act 1986) that was passed in 1986 to “manage” protests. According to the British government, this legislation is no longer considered fit to manage “the types of protests we experience today.” Therefore, the legislation is being updated to allow the police to “safely and effectively manage” protests. 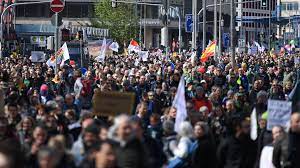 The reality is that more and more people in the UK, as in many countries across the world, have been coming out on the streets to protest racist attacks, cutbacks on social spending, crimes against women and other anti-people measures of the state. The proposed Bill gives arbitrary powers to the police forces to criminalise all such protests and gatherings.

This is very similar to the recent legislation that has been introduced in our country, in Uttar Pradesh and Haryana. Everywhere in the world, the ruling class is negating the right of people to protest the increasing anti-people policies and crushing all dissent to their dictate. In the 3rd April protests, the police even detained some legal observers under “health protection regulations”. These legal observers are present at protest sites to observe the event and provide legal support to the protestors, in the event of a confrontation.

Working people in Britain have raised their voices against this Bill and have vowed to continue to protest its passage. They are recognising the danger coming from the ruling class increasing police powers, under one pretext or another, to crush the just struggles of people.