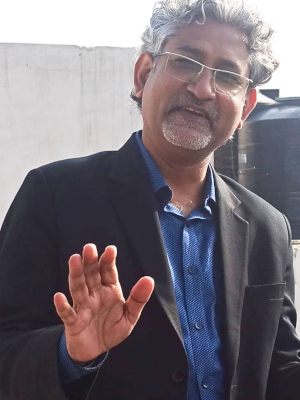 With extreme shock and sorrow, the Central Committee of the Communist Ghadar Party of India announces the passing away of our dear Comrade Pravin Ramteke in the early hours of May 4.  He was snatched away from our midst at the young age of 54, after a brief battle with the Covid-19 disease.

Comrade Pravin was born in Chandrapur, Maharashtra, in a working class family which maintained strong roots in farming. He was the first person in his family to receive higher education. He combined in himself a voracious thirst for knowledge with the desire to serve humanity.

Pravin completed his MTech in Aeronautical Engineering from IIT Mumbai. It is in that period, more than 30 years ago, that he joined the Party. From the day he joined the first communist study circle, till his dying breath, he remained steadfast in his conviction in the line of the Party and in the victory of revolution and communism.

In his student days, Pravin played an active role in organising and building study circles in the campus. Thereafter, he has contributed to the building of party organisations and various other organisations of struggle for the rights of workers, peasants, women and youth. .

Pravin had an extremely warm and endearing personality. His energy and enthusiasm was infectious.  Sitting in a meeting or rally, he would quickly compose poems and najams. He was ever ready to sing a revolutionary song that would inspire everyone present.

The entire party is grief stricken at the passing away of Comrade Pravin. Let us vow to turn this grief into strength. Let us work with redoubled energy to fulfill our mission.

FOCUS On the 75th Anniversary of the United Nations

FOCUS On the 75th anniversary of the end of World War II: Imperialism was and remains the source of war and conflict in the world