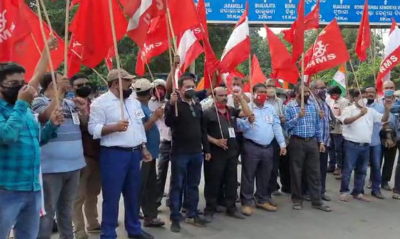 SAIL is one of the major public sector steel companies in the world with five integrated steel plants in Rourkela, Durgapur, Bhilai, Bokaro and Burnpur, three special plants at Salem, Durgapur, and Bhadravati, a ferro alloy plant at Chandrapur and about 20 coal and iron ore mines. RINL has a major steel plant in Vishakhapatnam.

The strike call was in response to a failure in negotiations with the management on wages and other issues. A collective agreement is usually revised every five years by the National Joint Committee on Steel (NJCS), made up by SAIL management and five central trade union federations. The wage revision has been pending since December 2017. 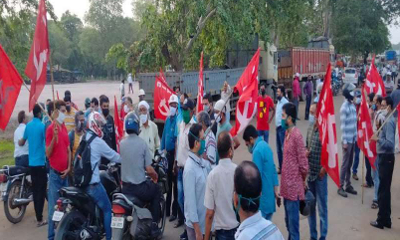 The trade unions had been trying to negotiate with the management for more than six days starting 22nd June. The talks broke down when the SAIL management rejected the demand of the workers for wage revision.

As a prelude to the strike across the country, the workers wore black badges on 28th June. They held demonstrations on 29th June and went on strike on 30th June.

Workers have condemned the management for failing to address their genuine demands over the long-pending wage revision. They are pointing out that workers have continued working during the pandemic and the company has recorded a considerable profit.

Meanwhile, RINL workers at Visakhapatnam have been observing relay hunger strikes at the Steel Plant arch at Kurmannapalem for over 135 days, against the Centre’s decision to privatise it. A one-day strike was observed on June 29, 2021.

As part of the day-long strike, the workers boycotted work and staged a dharna at the main gate of RINL-VSP. They threatened to go on an indefinite strike if the Centre does not change its decision on privatisation of the plant.