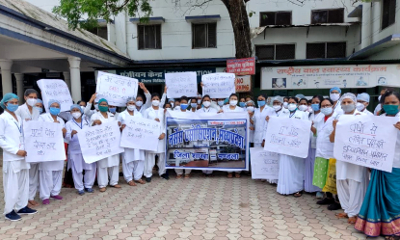 It is noteworthy that 300 nurses from Hamidia Hospital and 100 nurses from Sultania Hospital in Bhopal, the state capital had announced that they would go on a one-day mass leave on 28th June if their demands were not accepted by the administration. They gathered in front of the office of Superintendent of Nurses of Hamidia Hospital on the morning of 28th June. They returned to work after assurances from the Hamidia Hospital superintendent and the dean of Gandhi Medical College. A day after this, on 30th June, they started an indefinite strike. 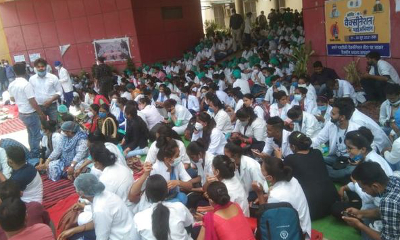 Hospital nurses are on strike in the entire state including in Gwalior, Jabalpur, Rewa, Sagar and Indore. Nurses from National Health Mission (NHM) are also participating in the daily strike at Maharaja Yashwant Rao Hospital in Indore. Earlier, more than 150 nurses from Radha Swami Centre and other hospitals also came forward spiritedly in support of the strike.

Instead of accepting the legitimate demands of the nurses, the government is fueling divisions among the nurses to break the strike. The government is getting nursing work done by nursing students who do not yet have any work experience.

The nurses are striking bravely in front of the gates of their respective hospitals for their demands. In the demonstration, the nurses raised slogans against the government by waving the Corona Warriors symbol and threatened to return the honor to the Chief Minister of the state if their demands were not met.

The main demands of the striking nurses are that the old pension scheme should be implemented; nurses working during the COVID-19 period should be given two salary increments; amendments to be made to the recruitment rules; higher education facilities be provided to serving nurses; all nurses be equally given the benefits of the 7th Pay Commission; along with compassionate appointment of kin of nursing staff who died in the line of duty during the COVID-19 period, they should be awarded the National Corona Warrior Award; and recruitment of male nurses should be done with immediate effect.

Thanks to the unrelenting struggle of the nurses, higher officials of the Health and Medical Education Department have been forced to call office-bearers of the State Nurses Association and the Regional Nurses Association for talks!