Thirteenth meeting organised by Kamgar Ekta Committee in the series “Unite Against Privatisation!” 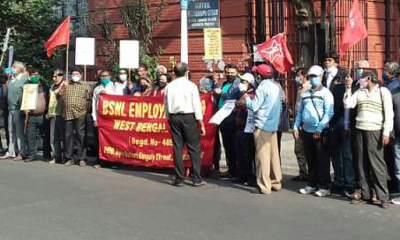 Kamgar Ekta Committee (KEC) organised a public meeting on June 20, 2021 to oppose the privatisation of Bharat Sanchar Nigam Limited (BSNL). It was attended by more than 200 trade union leaders from steel, railways, port & docks, electricity, petroleum, BSNL and activists from people’s organisations. This was the 13th meeting in the series “Unite against Privatisation”, started in September 2020. Previous meetings dealt with the privatisation of various PSUs and government establishments.

The first presentation was by Com Girish of KEC gave an overview of the telecom sector and pointed out how all the parties that have led the government since 1991 have made sure that the policy of Globalisation through Privatisation and Liberalisation has been implemented. (See box.)

This presentation was appreciated by all the invited speakers as well as by the other participants in their interventions. The speakers also appreciated the fact that workers and leaders from other sectors as well as people at large had come to express their support to the BSNL workers.

The presentation was followed with the speeches of the invited speakers. (See the boxes)

There were a number of interventions including those by Com Krushna Bhoyar, General Secretary, Maharashtra State Electricity Workers Federation (AITUC) and Joint Secretary, All India Electricity Workers Federation, Com Shyam Nair, Zonal Secretary, Western Railway, All India Loco Running Staff Association (AILRSA) and Com.P.S.Seshodia, Central Vice President and Director Education/Trade Union/Uttariya Railway Mazdoor Union/NFIR. Speakers clearly expressed the need to fight against privatisation for the sake of our people and the need to involve people in this fight. Many strongly expressed the view that a united struggle of all the employees in Government and public sector along with the consumers is the need of the hour and with this we can definitely halt and reverse the Government’s anti-worker, anti-people and anti-national policy of privatisation of the public and government sectors.

The meeting ended on a very optimistic note.