A nationwide demonstration of power sector workers took place on Monday, 19th July. There was participation of over 60% of the 2 million-plus electricity employees and engineers across the country. The two-hour long demonstration coincided with the first day of Parliament’s Monsoon session. 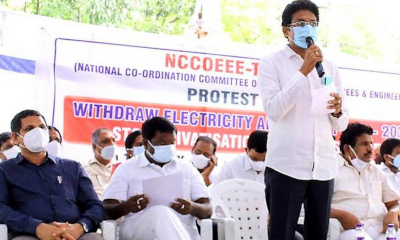 The National Coordination Committee of Electricity Employees & Engineers (NCCOEEE) which organised the demonstration announced a strike notice at the same time. The notice was addressed to respective heads of the utilities, notifying them that staff federations of power utilities across the country will boycott work for one day on 10th August, in case their demands are not met till then. The demands include the scrapping of the Electricity (Amendment) Bill, 2021, which has been listed to be tabled in Parliament during the ongoing Monsoon session. Along with the scrapping of the Amendment Bill, the workers are also demanding that the Centre should cancel all existing private licenses and franchises in power sector, alongside withdrawing the process of privatisation of electricity in states and UTs.

The said amendment to the Electricity Act seeks to de-license power distribution business; this will allegedly result in the privatisation of power distribution across the country – an exercise that is already ongoing in some States and Union Territories (UTs). The NCCOEEE has pointed out that this measure is to create full scope for maximum profit by the private capitalist monopolies. Opening up the distribution business to private companies is expected to lead to higher tariffs for the ordinary consumer.

The coordination committee is planning to gear up the power utility employees for the 10th August strike action. In the meanwhile, it has planned to commence a nationwide campaign from 25th July– 9th August. A delegation of the electricity employees and engineers are scheduled to travel to Delhi to meet R K Singh, Union Minister, Power, New and Renewable Energy on 27th July and place their demands before him.