Workers of the Century Yarn & Century Denim Mills, owned and managed by the Birla Group’s Century Textiles & Industries Limited, have been on hunger strike since July 12, at the factory in Khargone district of Madhya Pradesh, located about 290 Km from the state capital, Bhopal. 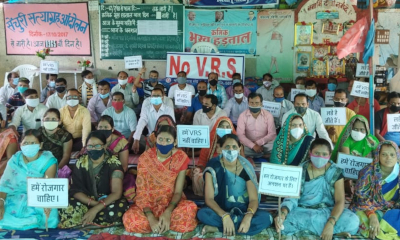 The factory, spread over 84 acres, was first sold to Kolkata-based company Wearit Global Limited by the Aditya Birla Group in 2017 at throw-away prices (see Box: Background of the protest). The new company subsequently closed it down, leaving over 900 workers of the factory unemployed overnight.

Since then, for the past nearly 4 years, the Century Mill workers have been protesting against the closure of the mill and the threat to their livelihood, both before and during the Covid-19 pandemic.

After a court battle, the workers were getting salaries even after the mill was shut down. But on June 29, the company put up an order stating all the workers will have to take VRS (Voluntary Retirement Scheme) and set a deadline of July 13.

The workers are protesting against the company’s decision to forcibly impose a VRS on them. The company management has arbitrarily sent a meagre amount of the VRS to their bank accounts and ordered them to vacate their quarters on the mill premises. With the sudden loss of their wages, the workers are desperate and face an extremely uncertain future. The workers organized under the banner of Shramik Janta Sangh (SJS) have challenged the company’s decision in the High Court, calling it a gross “violation of industrial rules”.

The protesting workers have been continuously facing threats from the district administration, ordering them to call off the protest which has been declared “illegal” under prohibitory orders – Section 144 imposed in the conditions of the pandemic. The police has been repeatedly trying  to intimidate the workers into ending the strike. On July 17 the police arrested several of the protesting workers who were on hunger-strike, as part of this intimidation.

The struggle of the Century Mill workers against the forcible imposition of VRS and the loss of their jobs is a struggle for their right to livelihood. It is an entirely just struggle.