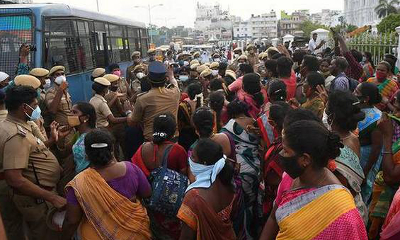 Conservancy workers (manual scavengers) in Salem, Tamilnadu staged a protest dharna at the municipal corporation office on July 14, demanding settlement of their due wages by the corporation.

The protesting workers pointed out the fact the municipal authorities have not paid the workers their salaries in spite of the fact that the conservancy workers have risked their lives during the COVID-19 pandemic. They pointed out that there are over 5,000 conservancy workers, both permanent and temporary, employed in all the 60 wards. They are paid monthly wages. But more than 2,500 permanent workers have not been paid their wages for the past three months. They are demanding that the municipal corporation pay them their dues at the earliest. They have complained to the authorities that since they did not receive their salary, they were unable to pay house rent and also fulfil their basic needs. The protesting workers also complained that though deduction towards their Provident Fund was made regularly, the amount was not credited to their PF accounts. They have accused the authorities of defrauding the workers of their hard-earned money.