As part of the on-going kisan agitation demanding repeal of the three anti-kisan laws, kisans throughout Haryana held a number of protest actions all over the state on July 11. The kisans had announced their decision to protest at all events organized by the state government in order to press for their demands. 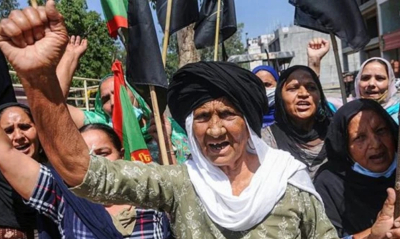 According to reports, in Sirsa district, Haryana Assembly Deputy Speaker Ranbir Singh Gangwa was gheraoed by the protesting kisans.
The Haryana Government arrested five kisans and charged them with sedition. In response to this, thousands of kisans blocked all the roads leading to the secretariat, the Choudhary Devi Lal University, and the Bhagat Singh stadium. Many Samukta Kisan Morcha leaders came to address the kisans, pledging to step up the struggle for the release of the five kisans. Samyukta Kisan Morcha leader Baldev Singh Sirsa sat on a fast unto death demanding their release. Finally, on July 21, the government released the five arrested kisans. 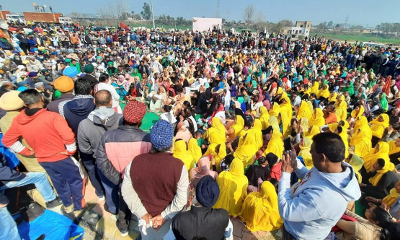 In Fatehabad, the protesting kisans marched to an event addressed by Haryana Cooperation Minister Banwari Lal and Sirsa MP Sunita Duggal. Braving the heavy police barricades, they raised slogans in support of their demands.
In Jhajjar district, agitated kisans carrying black flags protested at a government program which was supposed to be addressed by state BJP chief OP Dhankar, and prevented the event from taking place. They raised slogans reiterating their determination to not allow any state government programs to take place until the anti-kisan laws are repealed.
In Ambala district, kisans protested at a government program on the Ambala-Saha road. In Panipat, protesting kisans were arrested by the police but later released, as the kisans continued their protest actions. Kisans also showed their anger and resentment at the government by holding a march, with tractors and many different vehicles, from Dera Baba Nanak in Punjab’s Gurdaspur district to the Singhu border in Delhi.
The kisans are determined to carry on the struggle for repeal of the anti-kisan laws and for a law guaranteeing remunerative minimum support prices for all agricultural produce.