Health care workers in the US are waging powerful struggles against terribly exploitative and oppressive conditions of work. 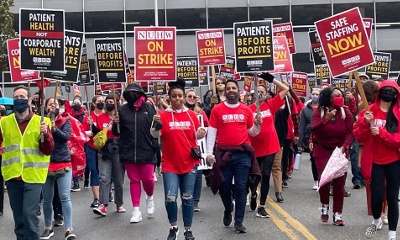 On November 19, nurses and mental health workers of Kaiser Permanente health care service in California went on indefinite strike in solidarity with engineers of the company. These engineers are responsible for maintaining the buildings and all the equipment used by the health care provider.

Hundreds of Kaiser engineers, nurses, and mental health workers were on the picket line outside the Kaiser San Jose Medical Center, holding signs that read “Patients Before Profits” and “Safe Staffing Now.” 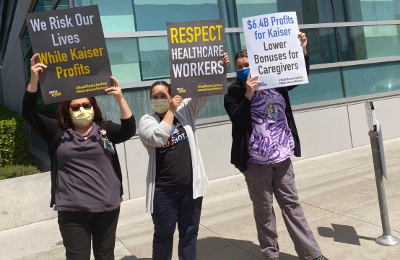 The nurses’ union has been demanding a new contract which would include a wage hike. It has demanded an increase in staff strength. The company has offered a meager 1% increase in salary. Further it has asked the union to agree that freshly hired nurses would be paid salaries 20% below that of those currently hired. The nurses’ union has rejected these proposals. 20,000 nurses went on solidarity strike with the engineers, to highlight their own conditions as well.

A striking nurse declared “It’s just unimaginably sad that the company we’ve worked for tirelessly during this pandemic the past two years is turning their backs on the employees the way they are.”

Thousands of mental health workers of the company took out a solidarity rally with the striking engineers. Their contract expired on October 1, and the company has refused to negotiate a new contract. The mental health workers pointed out that they are terribly understaffed. The management has refused to hire new staff to ease their workload. There is no cap on the number of patients they are forced to deal with. As a result, patients sometimes have to wait for one to three months for their next appointment. The long waiting times could have a terrible impact on patients, including death, according to some mental health professionals.

The monopoly capitalists of the US, like the monopoly capitalists in other countries, have used the Covid crisis to intensify the exploitation of workers and amass huge profits. This is particularly the case with the health care industry.  The struggle of engineers, nurses and mental health care workers of Kaiser Permanente, for better pay and working conditions, is a just struggle.