On December 1, 2021, 80 contract workers of the Indian Telephone Industries (ITI) Ltd. were terminated, for forming their union and demanding lockdown wages. They have been protesting for the past 100 days against their termination but have received no response from the company management. 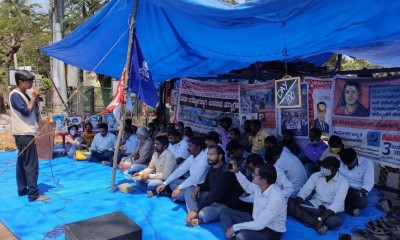 ITI Limited is a public sector undertaking in the telecommunications technology sector. The company has manufacturing facilities in Bengaluru, Naini, Rae Bareli, Mankapur and Palakkad along with an R&D centre in Bengaluru and 25 Marketing, Services & Projects (MSP) centers in different cities of India. Headquartered in Bengaluru, the company has about 2500 regular workers on its rolls. Hundreds more face superexploitation as contract workers, denied the rights enjoyed by regular workers. They are forced to work 12-14 hours a day, for wages much lower than that of regular workers.

To fight for their rights and oppose their severe exploitation, the contract workers of the Bengaluru unit of the ITI came together under the banner of the Karnataka General labour Union (KGLU). The workers were retrenched because they decided to unionise.

The remaining workers were made to work overtime and not given their dues.

In August 2020, some of the workers formed a union and filed cases against the company in the labour court. Following this, these workers were compensated by the company. But when more workers joined the union to fight for their rights, they were terminated. They were denied their dues. Since December 1, contract workers have been protesting outside the main gate of the ITI factory in Bengaluru, protesting against their termination, and demanding their dues.

The KGLU has pointed out how for years, the Public Sector ITI has been exploiting workers as contract labour. The hiring of these skilled workers was done through various private contractors. When a contractor’s contract expired, all the workers hired by the contractor lost their jobs. The new contractor would force the workers to take a 20% pay cut, if they wanted to get hired once again. The workers were asked to apply as fresh candidates, while those above the age of 30 years were discouraged from applying. The workers also faced discrimination on the basis of caste and gender, in hiring and in determining the wages.

The case of the contract workers of ITI Ltd. is one more of the countless cases where employers used the Covid-19 pandemic to deprive workers of their livelihood and intensify their exploitation.