On March 19, road construction workers in Arunachal Pradesh went on a hunger strike, protesting against being denied their wages for over nine months. 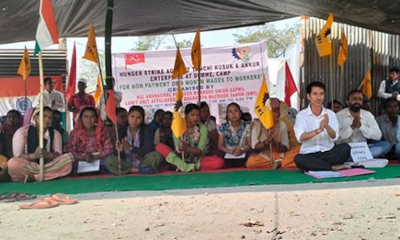 Organised under the banner of All Arunachal Pradesh Workers Union (AAPWU), these road construction workers staged a hunger strike in the office premises of Tamchi Kusuk Enterprise (TKE) in Highway Camp, Demwe.

The construction of National Highways is carried out by the National Highways & Infrastructure Development Corporation Ltd. (NHIDCL). The NHIDCL is under the Ministry of Road Transport & Highways. While road construction workers in Arunachal Pradesh, like in other parts of the country, are building an important infrastructure necessary for all-round development of society, they themselves are forced to lead a life of extreme insecurity.

The workers said that not being paid for their work for the last nine months has created a lot of trouble for them. “It has become difficult for us to feed our families and ourselves. Shops have stopped giving us grocery items on credit as we haven’t been able to clear our earlier debts with them. Our children are at home because we cannot afford sending them to the school. This is our only means of livelihood and since we are not getting our rightful payment, we cannot even seek help from elsewhere to keep our stoves burning,” they said.

The highway project in question is for construction of a two lane section of NH 13 of 18km, between Demwe and Brahmakund, which is budgeted at Rs 205 crores. According to the union, the NHIDCL has contracted the construction of the project to TKE. In turn, TKE has subcontracted the project to Ankur Enterprises (AE). When the workers demanded their dues from AE, they were physically attacked by goons of the company.

When the workers started their public protest, in the form of a hunger strike, all the organisations that had been colluding in exploiting them and depriving them of their wages — the government owned NHIDCL, the private company TKE and the sub-contractor AE — began blaming each other for the problem. The government owned NHIDCL claimed that it had released the wages of the workers. Ultimately, the private companies have agreed to pay the workers their wages by March 22.

Following this announcement, the AAPWU decided to call off the indefinite hunger strike. At the same time, the union warned that in case the companies violate their promise to pay the workers their dues, the workers will intensify their struggle.