Nearly 100 nurses employed at the COVID centre affiliated to the Lok Nayak Jaiprakash Narayan Hospital (LNJP / LNH), have been issued notices on March 3, stating that their services will stand terminated after March 31. The nurses have been on dharna at the gates of LNJP Hospital, since the beginning of March, demanding that they be re-instated. 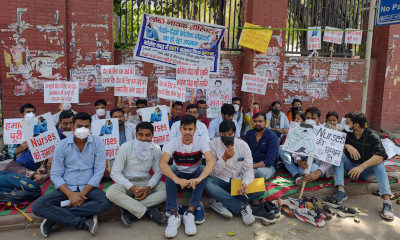 According to the protesting nurses, 250 nurses were employed on May 14, 2021, at the 500-bed COVID centre of LNJP Hospital in Delhi. The centre was started during the second COVID wave and was located at Ramleela Maidan. The nurses were hired on the basis of an advertisement issued by the Delhi government in April 2021. They were employed on 3-monthly contracts, which were renewed every 3 months. They had been promised that they would be absorbed in the regular services of the hospital.

These nurses worked at the COVID centre in the face of all odds, throughout the second and third wave of COVID. They performed vaccination, treatment and all other services related to COVID-19. Many of them contracted COVID, many lost their near and dear ones, but they continued to work, without medical leave, quarantine leave, etc. They worked in close coordination with the other departments of the hospital. Through their dedicated service, they achieved 0% death ratio in the COVID centre in the second and third waves. Their services were sometimes outsourced to other COVID centres, as the need arose. They were hailed as “COVID warriors” by the Prime Minister and Health Minister.

The termination notice summarily states that “Now as COVID has come to an end and this facility is being shut down … all the nurses posted at Ramleela ground or in vaccination or in LNH on the strength of Ramleela Maidan are directed not to continue their duties”.

While 93 of these nurses have been issued termination notices so far, the fate of the remaining nurses hired at the COVID facility remains uncertain.

This is one more example of the kind of insecurity of livelihood that workers in all sectors face under the present capitalist system. Those who do manage to find jobs are exploited to the bone, at the lowest possible wages, and then squeezed out like a lemon and thrown out when the capitalist system no longer requires their services.

Working people of all sections have to unite and fight for a new system, the socialist system, in which the means of production will be under social control and the economy will be geared to fulfil the needs of all.