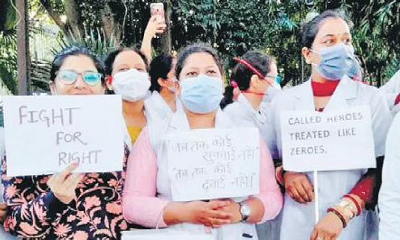 Nursing officers employed on contract at the central government-run Ram Manohar Lohia (RML) Hospital in New Delhi are deeply agitated at the threat of losing their jobs. The hospital has announced that new permanent nursing staff are going to be hired and that they are going to terminate the contractual nursing officers, some of whom have been working at the hospital for over a decade.

On February 14, 151 contractual nursing officers of RML Hospital in New Delhi were issued termination letters with a notice period of one month.

RML Hospital’s termination letter to the contractual nursing staff reads as follows: “The contracts of the 151 contractual staff nurses stand terminated on ‘first come last go’ basis by giving one month notice, from the date of issue of this order, depending on joining of new nursing officers.”

These nursing officers were appointed on contract at various times, in 2009, 2015, 2016. They have not been given wages at par with the regular nurses; instead, they have been forced to work at minimum wages. This is despite the fact that their selection was carried out by the Ministry of Health and Family Welfare, following official procedures.

And now, all of a sudden, the contractual nursing officers are being terminated. They are in a state of tremendous mental trauma, because if the termination order is implemented, they will face great difficulty in supporting their families, paying back their loans, etc. They have pointed out that at present, the majority of the nursing officers employed on contract have exceeded the eligible age limit for fresh government service recruitment.

The contractual nursing officers have filed a petition with the Central Administrative Tribunal (CAT), challenging the termination order. They have also written to the PMO and Health Ministry, asking for withdrawal of the termination order and regularisation of their services at the hospital.

In their submissions to the tribunal and to the PMO and Health Ministry, the contractual nursing officers have highlighted the fact that during the three waves of COVID, they worked as frontline warriors, giving their best services, with utmost dedication, risking their lives and the welfare of their families.

They have reminded the authorities that at that time, the Prime Minister had announced that those contractual nursing officers who have put in 100 days or more of duty during the Covid-19 pandemic should be given priority in selection for regular service. This announcement had been made by the Ministry of Health and Family Welfare of the central government. However, this has been blatantly violated.

The case of the contractual nursing officers of RML Hospital is one more example of the severe exploitation of workers and the grave insecurity of livelihood under the present capitalist system. The Covid-19 crisis has been used by the rulers to greatly step up the exploitation of the workers. Doctors, nurses and health workers, who toiled selflessly, in very difficult and dangerous conditions, to provide medical services to people during the pandemic, are facing particularly cruel attacks on their livelihood.