On June 18, tens of thousands of workers marched through the streets of Central London to protest against the huge increase in cost of living. The massive march ended in a rally in Parliament square. 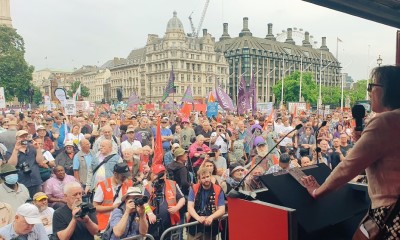 The rally demanded that the British government take immediate measures to help workers and their families to deal with the grim situation. The working people demanded better living conditions, real pay raises and a living wage for all, a ban on fire and re-hire schemes, decent sick benefits and an end to racism at work. They demanded that the energy supply companies be taxed and the charges paid by people for energy be cut. They denounced the attempts of the government to pass anti trade union laws to attack workers right to organize into trade unions.

The protest march was organised by the Trades Union Congress. Workers of many sectors took part in it. Students participated in large numbers. Hundreds of banners and placards carried by workers reflected the demands of different sections of the people. They showed that workers were fighting for the rights of all. The Fire Brigades Union (FBU) and the railworkers union, the RMT, which are playing a fore front role in fighting for the demands of the whole working class received a hero’s welcome as they entered Parliament Square.

The march and rally show that the working class and people of Britain are intensifying the struggles in the face of the attacks on their rights. Working people are saying that enough is enough.