Workers in Belgium went on a country-wide strike on June 20. A mass demonstration was organised in the capital, Brussels on the same day. 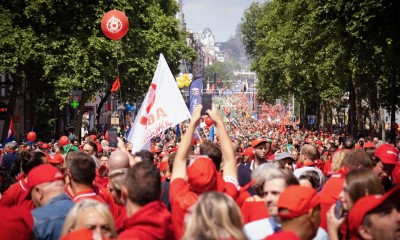 The workers are demanding an end to skyrocketing prices and wage freezes. More than 80,000 workers participated in the demonstration. Strikes took place in several sectors, particularly in transport, bringing the country to a standstill. All airline departures from Brussels International Airport were cancelled and other airports in the country were also affected. Metro, bus and streetcar services came to a halt across the country.

A popular slogan raised by the striking workers and displayed in banners in many of the strike actions was “Freeze Prices, Not Wages”. Workers denounced skyrocketing prices, including the price of heating, food, fuel and housing. In June, inflation in the country was estimated at 9%, the highest rate in 40 years. 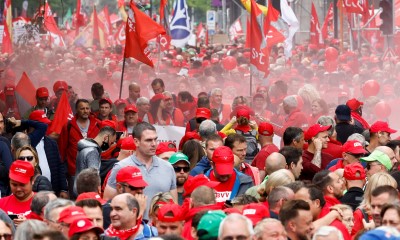 They pointed out that the international energy companies are making huge profits, taking advantage of soaring prices due to the war in Ukraine. Large Belgian companies in the oil and energy sector are making enormous profits. On the other hand, working-class families can no longer make ends meet because of the high cost of living.

Growth of workers’ wages in Belgium is limited by the 1996 Wage Standard Act. The Belgium ruling class has justified this Act with the argument that it is necessary that this will ensure that wages in Belgium are comparable with those in other European Union countries. In other words, the lower level of wages of workers of countries of Eastern Europe and Southern Europe has been used to depress the wages of Belgian workers.

For the period 2021-2022, the maximum margin for wage increases was set at 0.4 per cent. This ceiling is renewed every two years. The unions are demanding the abolition of this ceiling. They are demanding that the government remove all restrictions on wage increases, in order for the workers and their employers to renegotiate new wages that will ensure a decent living standard in the present conditions.

The workers are also demanding measures to reduce energy prices, an increase in the minimum wage and an increase in employers’ contributions to workers’ travel costs.

At the demonstration in Brussels, a large number of workers put up banners and raised slogans demanding “Money for Wages, Not for War! “ Brussels is not only the capital of Belgium but also the headquarters of the European Union and NATO. Many workers raised the slogan “Stop NATO!”. They held the aggressive policies of the western imperialist powers led by the US towards Russia, as directly responsible for the current price-rise. They denounced the US-led NATO alliance and its role in the war in Ukraine, including the EU sanctions against Russia and the massive increase of arms sales to Ukraine. They demanded that the government stop spending on war and instead, start investing in the well-being of the working people.