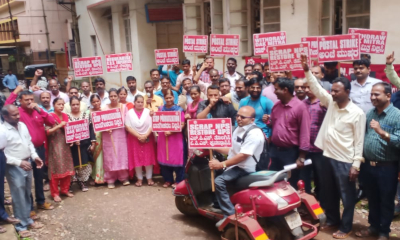 With 154,965 post offices (as on March 2017), India Post is the widest postal network in the world. India Post is involved in delivering letters and parcels by post, remitting money by money orders, accepting deposits under Small Savings Schemes, providing life insurance coverage under Postal Life Insurance (PLI) and Rural Postal Life Insurance (RPLI) and providing retail services like bill collection, sale of forms, etc. It is also used to collect data from more than a thousand villages for the Ministry of Statistics and Programme Implementation (MoSPI) for computation of the Consumer Price Index.

Postal workers have been periodically agitating for their demands. The present strike has been triggered by at least two factors in particular.

One of these is the attempt of the government to detach the financial services that are being provided by India Post and merge them with the services provided by the India Post Payment Bank (IPPB). The plan to create IPPB and to merge post office savings bank accounts with it was made in 2012-2013 itself, under the then Congress-led UPA government.

IPPB was set up as a corporate entity in September 2018. It has more than 650 branches and 3,250 access points. Banking and insurance services are a major source of revenue of India Post. There are 30 crore account holders in India Post with a total investment of nearly Rupees 10 lakh crore. Almost half the revenues of the Department of Posts are generated from post office banks. Postal workers have raised their concern that its merger with IPPB will adversely affect the financial condition of the Department of Posts. It is aimed at declaring India Post loss making as a prelude to its liquidation and privatisation.

Another reason is the government’s franchising of core postal operations to private companies, through schemes such as Dak Mitra and Common Services Centre (CSC).  Dak Mitra was given a big push during Covid pandemic. Apart from Dak Mitra scheme, Department of Post has partnered with Common Services Centre (CSC). It is estimated that CSC has 4.5 lakh village level entrepreneurs (VLEs) across the country and the plan of the government is to permit them to book registered parcels and Speedposts through its centralised portal.  This will affect the employment of nearly 30% of the postal employees.

At a meeting held on 5th August, to discuss the demands of the postal workers, officials of the Department of Posts declared that there was no proposal for corporatisation and privatisation of the postal department. But the postal workers have no faith in the assurances of the government. They decided not to withdraw their strike but to go ahead with it as per their strike notice, to warn the government that they will not give up their agitation based on assurances alone.

Postal workers have been repeatedly pointing out that the privatisation of postal services is bound to increase the cost as well as lead to deterioration of these services in the more remote areas of the country. This is against the general interest of society. The struggle of the workers of India Post deserves the support of all other sections of the working class fighting against privatisation.