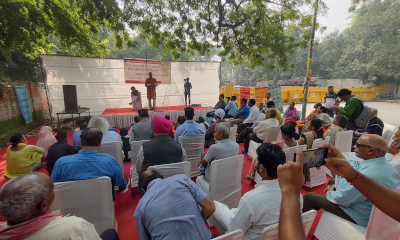 In the capital, New Delhi, a joint protest meeting was organised at Jantar Mantar on that day. The main banner at the meeting site read, “The Struggle Against State organised Communal Violence and Terror Continues!”, “An Attack on One is an Attack on All!”

Banners bearing slogans such as — Down with the state organised communal violence and state terrorism!, The organisers of 1984 massacre of Sikhs must be punished!, Punish the organizers of 1984, 1992, 2002 and other genocides! An attack on one is an attack on all! – adorned the meeting venue. Many of the participants also carried placards with these slogans.

S Raghavan, President of Lok Raj Sangathan, welcomed all the participants. He highlighted the fact that all organisations participating in the meeting have consistently and unitedly kept up the struggle to end state organised communal violence and state terror and to ensure that the guilty are punished. He pointed out that to call the 1984 massacre of Sikhs a “riot”, which official spokespersons still do, is a complete distortion of the truth. It was a state sponsored genocide.

In the past 38 years state terrorism, including communal violence, has been unleashed against our people with increasing frequency and intensity. Those who organise communal violence and harm our unity are never punished. Political parties like the BJP and Congress Party talk of defending national unity but actually work all the time to divide the people. It is wrong to think that the source of communal violence lies only in one party, i.e., BJP, and that changing the party in power will solve the problem. In order to advance the struggle against communal violence and state terror, we will have to build and strengthen the unity among all exploited and oppressed people for affirmation of rights, S Raghavan said.

Speaking on behalf of the Communist Ghadar Party of India, Comrade Birju Nayak elaborated that what took place in November 1984 was a state organised genocide. The cover-up over the past 38 years reveals the hand of the ruling class and its entire state machinery. While the Congress Party and the officials in leading positions of authority at those times, were the executors, the massacre was carried out in the service of the ruling class as a whole. The ruling class organised the genocide in order to resolve the contradictions within its ranks and smash the unity of the working class and toiling masses.

Those who promote the view that the 1984 genocide was an aberration are doing so to justify the line of calling upon the people to line up behind the Congress Party in its rivalry with the BJP. They are making out that the source of communalism and communal violence is a particular political party, the BJP, and not the ruling class as a whole. This is a line which will lead the struggle against communalism and communal violence on a dead-end road.

The source of state terrorism including communal violence lies in the rule of the capitalist class headed by the monopoly houses. The target of state terrorism including communal violence is the working class and toiling masses of our country, and its aim is to smash our unity and crush our struggle for rights. To advance our struggle against communal violence and state terror, it is necessary to build and strengthen the political unity of all the exploited and oppressed people, and of all progressive and democratic forces, in defence of the rights of all. Our struggle has to waged with the perspective of establishing a new state which will ensure that no one is discriminated against on the basis of her or his beliefs, and anyone who carries out such discrimination will be promptly and severely punished, regardless of her or his official position.

Speakers pointed out that for the past 38 years, successive governments have kept repeating the lie that what took place in November1984 was an “anti Sikh riot”, i.e. a “spontaneous” response to the assassination of Indira Gandhi. But the reality is that people everywhere tried their best to protect their Sikh neighbours. They showed, by recounting numerous vivid experiences, that the genocide was planned and executed by the Party which was in charge of the Central government at that time – the Congress Party. The entire state machinery worked actively to carry it out.

Speakers highlighted the systematic escalation of state terrorism during the past 38 years, including repeated episodes of state organised communal violence. The destruction of the Babri Masjid in 1992 followed by communal terror, the genocide of Muslims in 2002 in Gujarat, and many other blood-chilling acts have been organised with the full involvement of the parties in power and active deployment of the state machinery. Those who organise communal massacres and attack the unity of our people go unpunished, and in fact go on to occupy the highest positions in the state. On the other hand, the people fighting for their rights are incarcerated for years on end under fascist laws such as TADA, POTA, and UAPA.

The role of political parties such as the BJP and the Congress was raised by several speakers. These political parties systematically inflame passions on the basis of religion, caste, language and region so as to break the unity of our people. Speakers pointed out that communalism and communal violence will not end merely by changing the party in government.

The meeting concluded by affirming the necessity to build and strengthen the political unity of all the exploited and oppressed people, in defence of the rights of all.