The Loco Running Staff of the Southern Railways organized a protest demonstration on 22nd of Jan, 2014, in Chennai to highlight their key demands. A dharna was held in front of the Moore market near the Central Station. it was addressed by various union leaders and activists including Comrades V.R. Prakash, President of AILRSA, R. Murali, Zonal secretary of AILRSA, R.

Speakers pointed out that various directives had been issued by Railway board to improve the safety in railways by reducing accidents due to passing of signals. These include reduction in duty hours and night duties, increased rest time, and other steps to ensure that the Loco running staff is in a fit and rested condition when they begin their duties. They pointed out that the zonal administration was willfully disregarding these directives. Instead it was giving exactly opposite operational directives. The speakers pointed out that the zonal authorities are clearly conveying that they care least for the safety of the passengers and their own workmen. 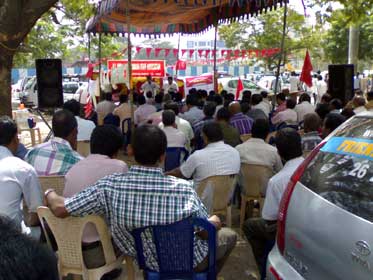 Considering the nature and importance of the work of Loco running staff, the joint secretary of ministry of labour has upheld the order of Regional Labour Commissioner of Chennai to reclassify the work of Loco pilots of passenger trains as “intensive”. Such a categorization would automatically mean reduced duty hours, and increased rest time, so that the engine staff is able to fulfill its great responsibility properly. The speakers pointed out that the railway authorities are refusing to implement this order of the Labour Ministry.

The speakers pointed out that even a slight distraction of concentration of the Loco pilot could result in a disaster. This demands that the Loco pilots be left free to concentrate on the main work of piloting the trains, and not be deployed for other work. The callousness of the railway authorities to safety is being shown by the fact that management is deliberately demanding that the engine crew carry out coupling and uncoupling work. Instead of ensuring that hand/parking brakes function effectively at all times, management is forcing Loco pilots to place skids. In other words, apart from the main function of driving, work that is not directly related to driving has been deliberately thrust upon them, intensifying their exploitation, and creating conditions for accidents. The AILRSA had conducted a signature campaign on the coupling issue among thousands of Loco running staff. 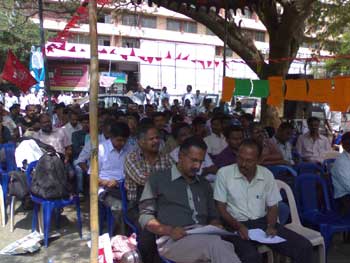 Speakers raised the issue of unfilled vacancies for the post of Loco pilots. This is causing immense pressure on the Loco pilots in the form of heavy work load, denial of vacations and terrible work conditions. Management is deliberately not filling up the vacancies in railways to exploit the existing staff to extreme levels.

They demanded that their duty hours and work classification issues be addressed immediately without further delay. Promotional opportunities, promotional increments for Loco pilots in shunting and goods trains were some of the other issues they demanded resolution for.

Speaking on behalf of the Mazdoor Ekta Committee, Com Baskar denounced the anti-worker attitude of the Railway management in not fulfilling the just demands of the Loco Running Staff, which were in the interest of the travelling public as well. He pointed out that the Mazdoor Ekta Committee had consistently stood by the Loco running staff and other railway workmen in their struggles in Mumbai, Delhi and all over the country. Why do we workers have to submit our demands to the parasitic authorities and beg them for our rights? Why can’t we ourselves become the rulers of India, deciding the fate of this country and run it in the right directions in the interests of all working people? Let us build our militant unity and march forward, leading all the toiling masses with the aim of becoming the rulers of India, he concluded. 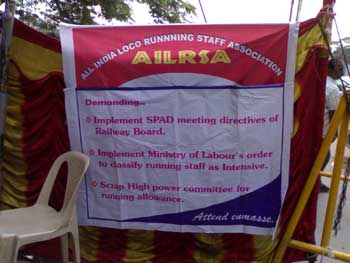 At the end of the dharna, workers raised slogans demanding their rights, and in defense of the unity of all workers. They resolved to further intensify their struggle in the coming period.

Mazdoor Ekta Lehar hails the unity and fighting spirit of the Loco men, the Station Masters union, and other unions of the rail workers in defence of their rights. This is a struggle which is at the same time in defence of the general interests of society and deserves the support of the entire working class.