Workers, activists and leaders of various organizations of the working class gathered for a Mayday programme in Chennai, organised by the Thozhilalar Ottrumai Iyakkam (Workers Unity Movement). 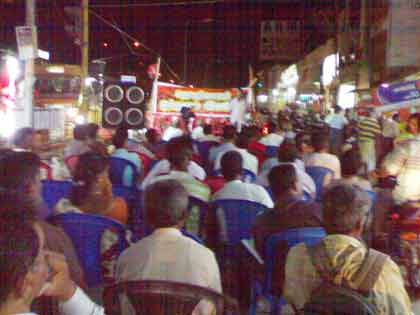 Workers, activists and leaders of various organizations of the working class gathered for a Mayday programme in Chennai, organised by the Thozhilalar Ottrumai Iyakkam (Workers Unity Movement).

In the last week of April, Thozhilalar Ottrumai Iyakkam released a Mayday leaflet describing the conditions of the working class in India and recent struggles of workers all over India and in Tamil Nadu. It elaborated onthe attacks by the government of the capitalists on workers’ rights and their livelihood. Totally disregarding the opposition of the workers, successive governments have gone ahead with the bourgeoisie's program of privatization and liberalization. Among other attacks, this program has converted the savings of workers in Provident Fund into a source of profit for the big capitalists, increasingly replaced the permanent workforce across industries with temporary and contract workers, lowered real wages, increased working hours and work load of workforce, etc. The leaflet called on the workers to unite and fight against these attacks of the capitalists and their governments. It pointed out the urgent need for the workers to build unity with other toiling masses and organize to become rulers of this country in order to put an end to exploitation and oppression of workers. It concluded with the call – “Let us build Working class Unity! Put an end to exploitation! Fight for the rule of workers and peasants! Inquilab Zindabad!”

This leaflet was distributed in thousands at many factory gates and working class areas. Comrades also put up hundreds of posters proclaiming the Mayday call and announcing the Mayday public meeting. 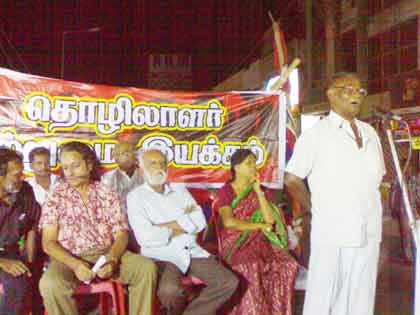 The Mayday program was held on 1st of May at Guduvancherry. The stage was decorated with the banner of the Thozhilalar Ottrumai Iyakkam. There were banners around the stage proclaiming “Long live Mayday!”, “Long live workers Unity!”, “Workers, Peasants, Women and Youth – India belongs to us and we are her masters!”. Workers from Maraimalai Nagar and Guduvancherry area industries, hospital workers from VHS Hospital and Global Healthcity, Railway Loco men, Airport Authority staff, Air India workers, activists of Thozhilalar Ottrumai Iyakkam and others attended this Mayday meeting.

The program started around 6 PM. and was chaired by Com. Vallancherry K.Hameed, Secretary of WUM – Kanchipuram district. He welcomed the gathering. He briefly traced the experience of the working class in Chennai in the last few decades. He pointed out to certain negative trends in the functioning of unions, such as, lack of democratic centralism, envy and competition between leaders, tailing behind capitalist parties that have led to disunity and weakening of the militant spirit of workers. He emphasized the urgent need to build broad unity of the workers cutting across parties, trade unions and different branches of industry, etc. as the only way to fight against the capitalists. He called on the workers and the working class activists to unite in Thozhilalar Ottrumai Iyakkam.

Com PU Venkatesan, Railway Loco running staff spoke of the exploitation that goes on in Railways. He narrated how Railway management ignores the safety measures and puts the railway workers and the traveling public at greater risk. All the time, the Railway management is privatizing vital services, leading to severe exploitation of workers while adding to the profits for the capitalists and contractors.

Com Yadavraj of Air India United Workers Union spoke of the condition of workers in Air India. While hundreds of casual workers were denied their rights by this massive organization, the rulers have plunged Air India in deep losses to satisfy the greed of the big capitalists – Indian and foreign. He expressed the determination of Air India workers to fight vigorously for their rights.

Com L. George, Southern regional secretary of Airport Authority Employees Union (AAEU) spoke of the attempt of the Government to privatize the Airports and hand it over to private capitalists. He pointed out that this move is not only against the interests of the workers who have built up this mammoth organization from scratch, but it is also anti-national as this wealth belongs to the people of India. He recalled the efforts and actions taken by the workers' union, including the recent stay by Madras High court to stop the privatization moves of the government. He expressed the determination of the workers and the union to continue this struggle till the threat of privatization is totally eliminated. Com George also emphasized the need for the broad unity of all the workers across unions and industries, irrespective of their affiliations to political parties in order to fight against the capitalist offensive.

Com Kabilan of Thozhilalar Ottrumai Iyakkam spoke next. He listed the recent struggles of the workers in and around Chennai in defense of their right to form unions, demanding better wages and other rights. Real wages of workers have continued to fall in the last decade. As per the Annual survey of Industries, between 2005 to 2012 the average wages of workers in India have risen by 81%. While the total value of output manufactured and serviced by workers have risen by 203% which is 2 ½ times the rate of raise of workers wages! And the net profits by the capitalists for the same period have risen by 145%! These figures show the extent of exploitation of workers. He said the rise in wages has also to be looked at in conjunction with the reduction of the workforce and increase of work load and productivity per worker.

Today the greed of the capitalists has made the 8 hour work a day dream for many of us. In reality most of the workers, especially in the newer industries such as IT, banks, insurance, etc are made to slog out 10 to 12 hours a day without any defined limit of the working hours. Ignoring the fierce objections of crores of workers, Indian government has gone ahead to curtail the pension fund scheme and made it as a fertile ground for the profits of big capitalists. All over the country, lakhs of permanent workers are thrown out of their jobs and are being replaced by temporary and causal workers at lower wages and on extremely exploitative terms.

Attacks on workers have intensified on all fronts. This is because the big capitalists are ruling this country and working people have no rights in this system. Recent elections clearly show how electoral process and political process are serving the interests of the capitalists and their parties. Com. Kabilan explained how this system excludes the workers and peasants from presenting the real alternative to this exploitative political system. He emphasized the need for deep going changes in the electoral and political process in order to reflect the aspirations of the working people.

In order to build a society without exploitation and oppression, it is a must that the working class which forms a majority in India today rules this country. Only such a rule of the workers can provide for the workers, peasants, women and youth and meet their aspirations. Working class is the only class capable of leading this society without any crisis as we see it today and lead it to prosperity for all the working people. Once exploitation is eliminated, productive forces of the society will multiply maniifold adding tremendous momentum to the development of society and their welfare. All such measures are possible, only if working class can be the leader and ruler of this country and the political process is revamped to support it, he said.

It calls for the urgent need to throw away the existing Constitution and replace it with a new Constitution which will recognize the rights of workers, peasants, women and youth of this country and put an end to the exploitation of labour . In order to do this, we workers must unite, build our fighting unity and move forward with determination to rule this country, he said.

Com Kuzal from Thozhilalar Poratta Iyakkam (Workers' Struggle Movement) pointed out the urgent need for the workers to fight for good wages and assurance for jobs from the government. He called on the workers to identify the right working class party and to work under its leadership in order to achieve the class objectives.

Com Saravanan of Communist Ghadar Party of India greeted the workers on the Mayday. He recalled the militant struggle of the Chicago workers 128 years back. Working class cannot win its demands without unity. In 1947, big capitalists took over power from the hands of the British colonialists, although it was the working class and communists who sacrificed everything for the sake of the country's independence. Since that time, Indian capitalists have been ruling India, exploiting all the workers and other people. In order to end exploitation and build socialism, it is necessary for the working class to win political power from the hands of the capitalists. It is also necessary to overthrow the existing system of governance and build a new state of workers and peasants in its place. He expressed confidence that the Indian working class will soon achieve its independence and establish socialism on Indian soil.

Com TSS Mani, senior journalist of Thanthi TV spoke of the militant unity that existed in 70s and its weakening over the years. There is urgent need to re-build that fighting unity in order that working people can win and defend their rights. Referring to the bomb blast in the train at Chennai central station, he questioned who could have set it up? Investigations should cover the major political parties of the bourgeoisie who are vying for power as they would be the beneficiaries of such criminal and terrorist acts. As always, the bourgeois media is not focusing on potential criminals but blaming Islamic militants and Pakistani agents. He called for practical steps to build the working class and communist movement in our country.

Com Saraswathi stated that women form 50% of the population. They have contributed enormously to building the wealth of this country. She stated that women as a whole contribute about 70% of the productive labour of the world. However in the current social system their labour, just like that of workers is not recognized. Besides fighting for the special rights of women and against the prevailing social and religious backwardness, it is important that women must fight shoulder to shoulder with men in order to put an end to exploitation, she emphasized.

Com. K Hameed reiterated the resolve of workers on this Mayday to build unity, fight against exploitation and to struggle to become the rulers of this country. The Mayday meeting concluded with this militant call.