September 11, 2014 marked 56 years of the enforcement of the Armed Forces Special Powers Act (AFSPA) by the Central Government headed by Jawaharlal Nehru of the Congress Party.

September 11, 2014 marked 56 years of the enforcement of the Armed Forces Special Powers Act (AFSPA) by the Central Government headed by Jawaharlal Nehru of the Congress Party. In all the states of the North East where this fascist law is in place, there were powerful protests by people demanding that the current Central Government headed by Narender Modi of the BJP immediately repeal this fascist law.

Women vendors organized silent protests demanding repeal of AFPSA in all the three women’s market complexes of Imphal, Manipur. At the entrances of these three market complexes, banners declared “Stop state terrorism, 56 years of AFSPA is not temporary measure.” 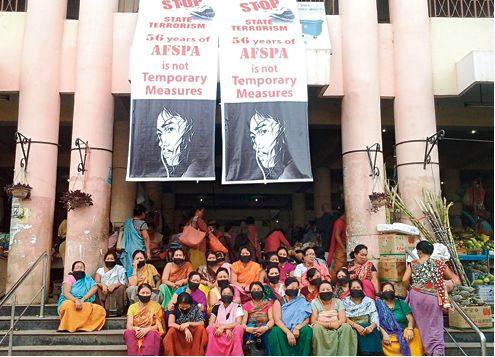 In 1980, the entire state of Manipur was brought under AFSPA. It is still in force in most of the state, despite the powerful and persistent protests of the people of Manipur and rest of India for its repeal.

In Guwahati, Assam, human rights organizations met and declared their resolve to launch a country wide struggle for repeal of AFSPA.

In Meghalaya, AFSPA is applicable to 20km along the border with Assam. A public meeting in Shillong called for the repeal of the act by parliament. The convenor of the meeting, Rev. P.B.M. Basaiawmoit has written to the Prime Minister that such a law “actually makes a laughing stock of democracy”.

AFSPA is a fascist law that serves the Indian ruling class in colonizing and subjugating the peoples of North East and Kashmir, through force of arms. The ruling class and their political parties always give various justifications for AFSPA. They even manufacture justifications, by organizing various terrorist groups through the intelligence agencies of the state and then justifying the fascist rule on the basis of the activities of these agencies. They organise chauvinist movements to divide the fighting peoples, and then pretend that without their humanitarian interventions, there would be bloodbaths. This is standard operating procedure, followed by all imperialist powers, with the US and Britain leading the way at the present time.  This is what is going on in Manipur, Assam, etc.

The demand for repeal of AFSPA shows that the people of the North East are refusing to be side tracked by the ruling class. The Communist Ghadar Party calls upon the working class and people of our country to fight for the repeal of this fascist law.