Lakhs of workers from all sectors of the economy participated in militant dharnas, marches, and other manifestations on December 5, 2014.

Lakhs of workers from all sectors of the economy participated in militant dharnas, marches, and other manifestations on December 5, 2014.

Such actions took place in the national capital Delhi, in all state capitals, as well as in many district headquarters of the country. These actions were part of the All India Resistance Day called by the Trade Unions and Federations of our country against the onslaught on the rights of workers being carried out by the current BJP led government in the name of “labour law reforms”. Workers were protesting against the privatization program of the government, the opening up of vital sectors of the economy such as Defence production, Railways, and the Banking and Insurance Sector to Foreign Capital, in complete disregard for the well being of the workers and endangering the sovereignty of our country.

In Delhi, workers from the National Capital Region participated militantly in a public meeting in Jantar Mantar. There were Bank employees, Insurance employees, Locomen, Railway Guards, workers from Manesar, Panipat and Sonipat industrial belts, Food Corporation of India workers protesting privatization, workers of the Municipal Services, Delhi Jal Board, as well as workers from the different industrial areas of Delhi including Okhla Industrial Area. There were many Anganwadi and Asha women workers as well. 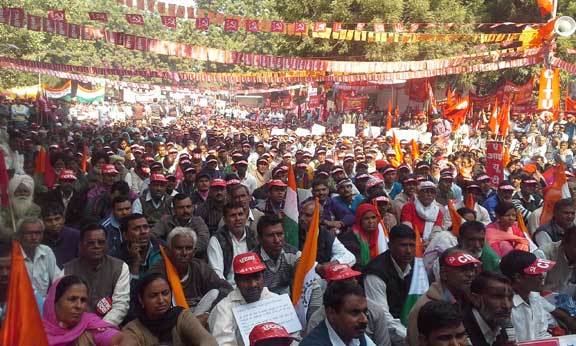 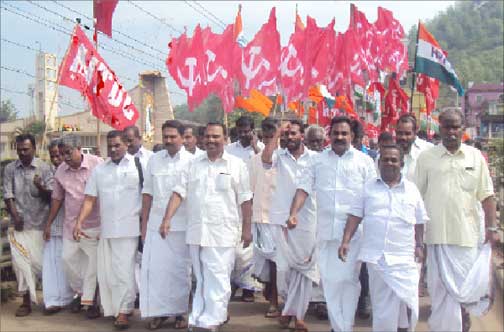 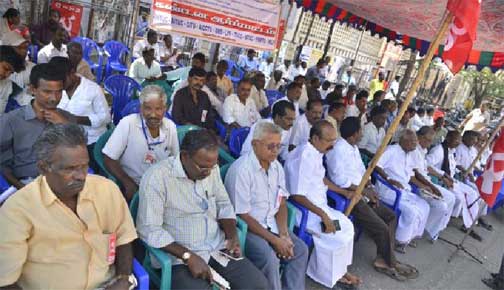 The Rally was addressed by leaders of BMS, INTUC, AITUC, HMS, CITU, AIUTUC, TUCC, SEWA, AICCTU, UTUC, LPF and MEC. Central leaders of these organizations addressed the rally and expressed their resolve to further step up the struggle, in defence of the rights of workers, and force the government to reverse its anti worker and anti national course.

In addition to the posters brought out by the joint committee of the trade unions, the industrial areas of Delhi and many other industrial centers of the country were covered with posters of the CGPI calling upon workers to make the December 5 rally a success. The posters called upon the workers to fight to end the rule of the monopoly bourgeoisie and establish the rule of the workers.

Addressing the rally on behalf of the MEC, its General Secretary Comrade Prakash Rao declared that the struggle raging in our country is between two classes. On one side is the class of exploiters headed by the biggest monopolies, and on the other is the working class, peasantry, and all the other toilers and oppressed people. The aim of our struggle is nothing less than overthrowing the rule of the monopoly bourgeoisie and establishing in its place the rule of the workers and peasants. The ruling bourgeoisie is wide awake, consciously carrying out its program, through the government of the day. This is a program to intensify the loot and plunder of our land, labour and natural resources, in close collaboration with the foreign monopolies, by savagely attacking the rights of workers.

The bourgeoisie replaces one government with another at the center and in the states according to what it thinks is the party which will best implement its agenda and fool the working class and toiling masses. These governments are nothing more nor less than managers of the biggest monopolies. Our struggle is not to replace one manager with another. It is to end the rule of the monopolies.

Our class is in fighting mood. The decision of the railway unions to prepare for a strike, the powerful voices of protest which came out of the All India Loco Running Staff Association meeting in Chittorgarh, and the All India Guards Council meeting in Tirupathi, the three day relay strike by financial sector workers, the decision of coal workers to go on strike against privatization, are indications that our struggle is intensifying. We must prepare to convert this day of resistance into a movement of resistance. We must build the unity committees of working class not just at this central level, but in each industrial area of our country, and in all the sectors.

The enthusiastic response of the workers participating in the rally, cutting across party and union affiliations, to this call reflects that a grave responsibility rests on the shoulders of the leaders of the working class to provide correct leadership to the class struggle of the workers in the coming period, so that it is crowned with victory. Comrade Prakash Rao concluded with a call to the workers to step up the united struggle against the liberalisation and privatization program of the ruling class and the attacks on the rights of labour with the aim of putting an end to the rule of the monopolies and establishing the rule of the workers.

Kamgar Sanghatna Samyukta Krit Samiti- Maharashtra, the umbrella federation of workers organizations in the State, organized a huge rally to protest the anti worker policies and anti worker changes in labour laws being passed by the Central government.More than 5000 workers from banks, insurance, transport, railways, engineering, teachers, and government employees participated in this rally. There were red flags everywhere and slogans denouncing the government. The leaders of AITUC, CITU, HMS, BMS, INTUC, Kamgar Ekta Committee, IFTU, TUSC, TUCI, Sarva Shramik Sangh, Sarva Shramik Sangathan, SUCI, BUCTU, BEFI, NRMU, AIIEA, and others were called on stage. Speaker after speaker denounced the policies of the government such as the moves to privatise Coal India, ONGC, Banks , Insurance and FDI in Defense and Railways. The proposed changes in labour laws to directly increase the exploitation of the working class and thereby the profits of the capitalists was universally condemned. Speakers pointed out that the BJP led state government of Maharashtra has announced that capitalists will be granted permission to start a business within three days of application and if within three days there is no response, then it should be assumed that defacto permission has been given. They challenged the governmentt of Maharashtra to give the workers a similar grant within three days for applications to a) Register the Union of the workers b) Make workers permanent and c) End contract labour. Speakers talked about the terrible working conditions of sanitation workers of the BMC.

It was after a long time that Mumbai has witnessed such a large and united gathering of workers irrespective of union and party affiliations. This shows that the workers are understanding that the government’s slogans of “Make in India” and “Acche Din ayenge” are just what they are- Acche Din for the capitalists by allowing the plundering of the land and labour of the Indian people by the capitalists- both Indian and foreign.

Workers of Tamilnadu, Kerala and Andhra Pradesh held militant demonstrations as part of the India wide workers agitations against the central government which is amending the labour laws in order to provide the most conducive climate for the big capitalists to ruthlessly exploit and oppress the workers.

Demonstrations were also held in Thiruvananthapuram, Idduki and many other districts and cities of Kerala. Trade unions CITU, AITUC, BMS, HRPE Union, KPWU Union, KSEW Union, HRPW Union, UTUC and many others took part in these demonstrations. In Thiruvananthapuram, thousands of workers and trade union activists marched from the Martyrs’ Column at Palayam to Raj Bhavan.

Demonstrations were held in Hyderabad of Telangana and Vijayawada andVisakapattinam of Andhra Pradesh. AITUC, ICTU, CITU, IFTU, BMS, AITUC, INTUC, HMS participated. Workers of the Steel Plant, Ports and Docks and BHEL were among those who participated.

Over 10,000 workers from different sections of the economy held a militant rally on December 5, 2014. Workers from the railways, road transport, banks, and other sectors of the economy participated in the rally. The All India Workers Council distributed thousands of leaflets appealing to the workers to step up the united struggle in defence of the rights of workers.

The National Federation of Indian Railwaymen (NFIR) including the Western Railway Mazdoor Sangh (WRMS) staged a dharna and took out a rally to protest against Government of India’s new policy to introduce 100 percent foreign direct investment (FDI) and privatization in railways and changes in the existing labour laws. Large number of railway employees joined the protests at Vadodara railway division office at Pratapnagar. “NFIR along with WRMS staged agitations in all six railway divisions of Western Railway including Mumbai, Vadodara, Ahmedabad, Rajkot, Bhavnagar and Ratlam,” Sharif Khan Pathan, WRMS’s president said.

As we are going to the press, MEL has been receiving reports from more towns of our country regarding the resistance action of December 5, 2014. MEL congratulates the working class of our country for this powerful manifestation.