In a hard-hitting speech, Prakash Rao drew the attention of the audience to the manifold ills that have plagued the system of representative democracy in place in our country, over the last 65 years, and conclusively showed that the solution to the problems of the workers, peasants and toiling masses lies in bringing about a fundamental change in the political system, political process and institutions.

Political activists, social activists, academics, lawyers, journalists, activists in the women's movement, trade union activists, students and youth, workers and other professionals vigorously discussed and unanimously resolved that a fundamental change in the political system, the political process, and institutions is necessary in order to ensure that people are really masters of our country.

At the call of the Lok Raj Sangathan, over 250 activists came together in Delhi at the Indian Social Institute on April 10, to participate in a Public Consultation on the way forward to ensure people's control over the political system, process and institutions.

The President of LRS pointed out that every day there is some news or other about scams, black money, illegal mining, violation of human rights, and other such things. All these are confirming again and again that people do not have any control over their lives and their future. It is the big corporate houses that control every aspect of the economy and polity through their political parties and their representatives in the legislatures, parliament, cabinet and other institutions.

Every election has revealed that our people have no say in the day-to-day running of the country, in selecting and electing their representatives, in making legislation that protects their rights or in creating and controlling mechanisms and institutions that enable them to rule themselves. Further on, he pointed out that public opinion has been reiterating that the executive, the legislature and the judiciary must serve the people and be under their control and supervision. 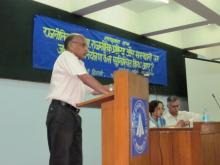 In a hard-hitting speech, Prakash Rao drew the attention of the audience to the manifold ills that have plagued the system of representative democracy in place in our country, over the last 65 years, and conclusively showed that the solution to the problems of the workers, peasants and toiling masses lies in bringing about a fundamental change in the political system, political process and institutions.

The Consultation took place at a time when people are very angry at the brazen way in which the monopolies, the ministers and officials at the center and the states have been plundering the exchequer, in order to enrich themselves. It took place in the backdrop of the wide-ranging discussion amongst people questioning whether representative democracy ensures peoples control over decision making.

Participants took up the question whether the problems we face are because bad people are in positions of power, or because of the system. The overwhelming majority felt that the problem was with the system, and not with individuals. However good an individual may be, he or she is circumscribed by the system. This was substantiated by numerous examples. The system does not conform to individuals; rather individuals have to conform to the system. Hence the system needs to be completely overhauled.

Participants pointed out with numerous examples that the competition between monopolies for using the state to advance their interests is common to India as well as other countries such as US, Britain etc. Each monopoly house wants the best deal for itself in its rivalry with others, and it needs its own ministers, bureaucrats, parties and so on. Corruption is endemic to this economic system and we should not have any illusion that it can be eliminated as long as monopolies dominate the economic life of the country. Within this economic system, it is hard to believe that change in laws or setting up a new institution like Lok Pal is going to resolve the problem. 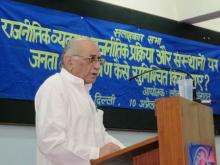 Serious discussion took place on why and how representative democracy is designed to ensure the domination of the most powerful economic interests over the rest of society. In India, as well as in other advance capitalist countries like US and Britain, it has been proven again and again that governments act on behalf of the biggest corporate houses, whether within the country, or in international relations. When the leaders of US, Britain, France or Russia have discussions with our Prime Minister, they come as salesman for their biggest monopolies. Similarly when our government negotiates with others, it represents the interests of Indian monopolies. This is not a coincidence. The political system and process in all these countries ensures that only governments representing the biggest monopolies can get elected.

After vigorous discussion, it was unanimously agreed that people cannot set the agenda or be decision makers in representative democracy. No amount of reforms of this representative democracy, as suggested by the EC or the Law Ministry is going to ensure this. Only direct democracy can ensure that people become decision makers and control the political system, process and institutions.

Participants pointed out that in representative democracy the first and last involvement of people in the political process was the vote. Having cast his vote, the voter has no control over the representative. The political parties and coalitions that came to power in the party system of governance act as gatekeepers to keep people away from power, while ensuring that the dictate of the monopolies is obeyed. 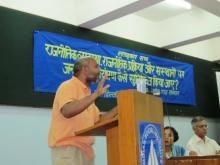 Participants elaborated on the alternative of direct democracy, whose nascent experiments have already been carried out in different parts of the country. The essential features of direct democracy are that the right to select candidates must belong to the electorate, not to political parties. Political parties or coalitions cannot come to power, and there will be no separate ruling party and opposition party. All those elected must together govern. Those elected must render periodic accounts to the electorate. There must be a mechanism for recalling those felt unfit by the electorate. The electorate must have the right to initiate legislation. All these proposals came from the concrete experience of activists from different parts of the country through their participation in the present political process and their experiments to innovate the process of direct democracy.

Participants emphasized that they are not against political parties. Political parties have an important role in organizing the working class and oppressed people and making them conscious of their rights.

The Consultation concluded in a spirited and optimistic atmosphere, in which activists from diverse backgrounds came to similar conclusions based on their own experiences. It was resolved to organize similar consultations in other regions of the country. It was also resolved to develop the discussion on direct democracy further. Issues such as who should have the right to write the constitution and amend it, who should select/elect the judiciary and other institutions, need to be further discussed. It was felt that there is particular need to discuss what kind of constitution India needs in order to ensure that the system and processes and institutions are under the control of people, and their rights are guaranteed through enforceable mechanisms.

MEL considers this consultation a very important step in the movement for a new political system and process that will actually empower the workers, peasants and other toiling masses to become the masters of their destiny.