Protesters march towards the Presidential Palace. 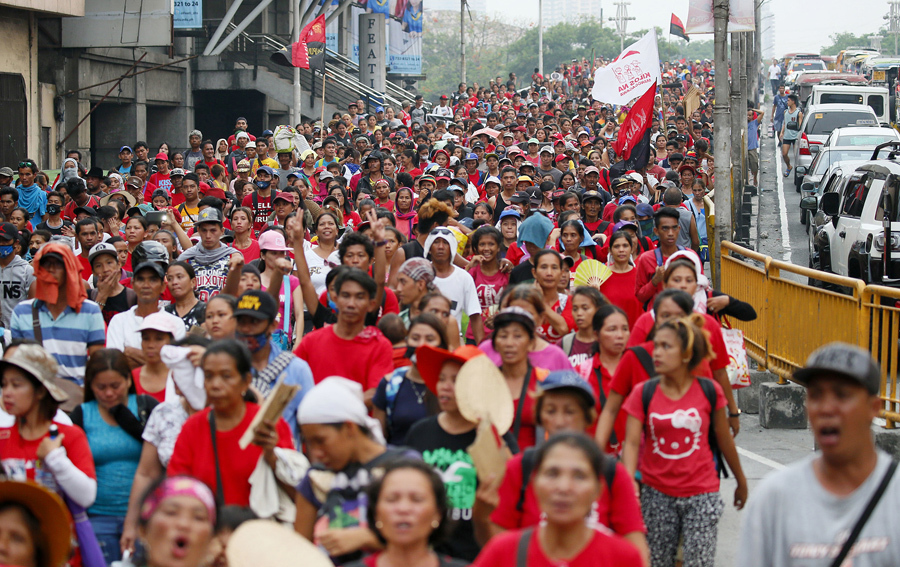 Mayday 2017 reflected the widespread opposition of people across the world to the attacks on their rights. Working people came out on the streets in large numbers in the streets of cities around the world on 1st May 2017.

In country after country, workers raised the same issues – low wages, the growth of “temporary” labour, the slashing of benefits and pensions, against military spending – underscoring the common struggles confronting the working class internationally. Governments around the world are imposing ever more vicious austerity measures in response to the global crisis of the capitalist system.

Several cities saw heavy police presence in anticipation of the demonstrations, leading to confrontation as workers militantly defied government orders against assembly. In Istanbul in Turkey, police fired tear gas and rubber bullets at demonstrators the country’s largest city, and arrested at least 200 people. In France, police used tear gas and truncheons, pushing demonstrators against a wall and clubbing them.

Thousands of garment workers in Bangladesh gathered to demand wage increases as well as better housing and health benefits and provision for the education of their children. In Cambodia, a thousand garment workers defied a government order and delivered a petition demanding a higher minimum wage and broader democratic rights. In Indonesia, some 10,000 workers marched on the presidential palace in Jakarta to demand a rise in the minimum wage, limits on outsourcing and improved health care and working conditions.

Taiwanese workers marched in thousands in the capital, Taipei, against low wages, poor working conditions and the elimination of basic pension provisions. Korean workers marched in Seoul, focusing their demands on a reduction in the use of temporary workers and “independent contractors” to evade paying legally required wages and benefits.

There were large demonstrations in a number of European cities: tens of thousands marched in Athens, Thessaloniki, and other Greek cities, while a 24-hour strike was called by several unions. Other marches took place in Britain, Italy, Spain, Belgium, Poland and elsewhere across the continent.

Just a couple of days to go for Mayday, Brazil witnessed one of the largest general strikes in its history with 35 million people participating. Amid record levels of unemployment – 13 million people, unions and workers in key sectors like automakers, petroleum, schools, post office and banking brought the country to a standstill. The strike call was given by the trade unions against the proposed austerity measures of government that included cutting pensions and weakening labour laws. Police used tear gas to clear highways of protesters, but bus services, the metro and trains all stopped working, bringing the capital to a standstill.

Puerto Rico was virtually shut down by a May Day strike against austerity measures imposed by the government. Demonstrators blocked roads to enforce a general strike while denouncing the US financial control board overseeing the administration.

Thousands of people marched in every major city of the United States in demonstrations to defend immigrant workers and oppose the Trump administration’s attacks on Hispanics, Muslims and other immigrants.

Protests were witnessed in Californian cities of San Francisco, San Jose and Oakland, where the docks were shut down by a longshoremen’s walkout in solidarity with the pro-immigrant demonstrations. There was a very large demonstration in Houston, and marches involving thousands in Chicago, Milwaukee, Philadelphia, New York City, Washington DC and Atlanta. Other cities reporting significant protests included Portland, Seattle, Phoenix, Las Vegas, Indianapolis, Pittsburgh, Miami, Boston and Providence, Rhode Island. In many cities, public school teachers and other employees did not report for work, many of them taking personal time to join the immigrant rights march and protest against having to go without a raise or a new contract for nearly five years.

The province of British Columbia in Canada witnessed demonstrations of workers of the Hospital Workers’ Union and employees of the Health Authorities against the privatization of health care in Vancouver, Surrey, New Westminister and other cities. Maritime transport workers, including members of the International Longshore and Warehouse Union and the BC Ferry and Marine Workers Union marched in Vancouver on May Day.

May Day, the international working class day was celebrated on May 1st, 2017 by Ghadar Heritage and Helping Hand in Toronto in a very militant and enthusiastic atmosphere.

Speakers narrated the glorious history of Mayday and traced its origin to the defiant demonstration of workers in Chicago in 1886. They hailed the workers and working people who were out on the streets on May 1 across many cities in Canada and the US despite the US state’s deliberate attempts to wipe out Mayday from the memories of the working people by designating a labour day holiday in September! The speakers pointed out how it is through struggle that the working class has managed to wrest some concessions from the bourgeoisie .

The speakers elaborated on the condition of the working class today. Despite winning the right to an 8-hour day, workers in many sectors are working 16 to 20 hours a day. These include taxi and truck industry workers. Most of the jobs are precarious; workers are contracted part time with no hope of ever getting permanent positions. The working class is being scattered by outsourcing and contracting out the work.

It was pointed out how the development of technical and scientific revolution has led to a phenomenal increase in the productivity of the workers but they still have to work so many hours to make their living which impairs their health and family life. Instead of reducing the drudgery and inhuman conditions of workers, the capitalist have used scientific and technological advancements to maximise their profits.

The speeches concluded with the call that the working class must unite and prepare to become the ruling class. The working class must overthrow this rotten system and take the reins of power in its hands and uproot the entire oppressive and exploitative system. That is the only way to end the crisis of capitalist and for progress of humanity.