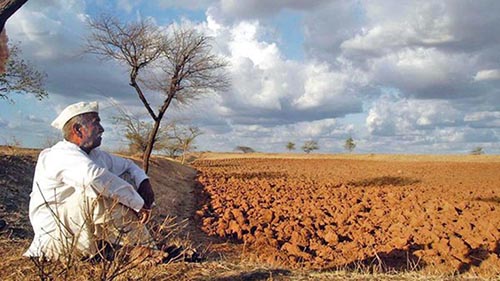 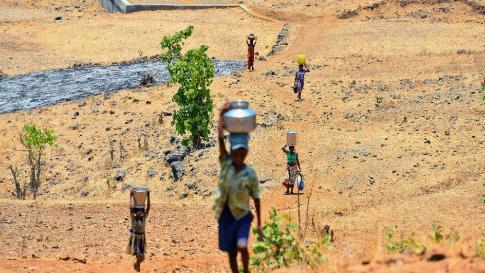 Due to inadequate rain in large parts of the state in 2018 monsoon, the Government of Maharashtra was forced to declare 151 out of the total 355 talukas as drought affected in November 2018. But within just 2 months it had to declare 931 more villages, spread across 8 districts, drought affected. As of now it is estimated that out of the total cultivable land of 85.76 lakh hectares in the state more than 60% has been affected severely by drought that has devastated more than 82 lakh farmers! The previous drought in 2016 had mainly hit Marathwada and Vidarbha regions. But, this time the affected districts are spread across the entire state of Maharashtra.

Over the years both the Congress and BJP led governments in the state have been completely apathetic to the plight of lakhs of farmers suffering due to drought. No concrete measures have been taken despite knowing that the state has faced drought every few years – 2002, 2004, 2009, 2015, 2016 and now in 2018-19.

Maharashtra has been facing severe water shortage conditions almost every year since 2012. Caught in the vicious circle of drought, damage to crops and debt, farmers in very large numbers have been committing suicide. The state has seen the highest number of farmers’ suicides in the last decade. The information from a reply to an RTI application shows that it has seen 11,598 farmers’ suicides between 2015 and 2018. The number shows a steep increase from 6,268 suicides recorded between 2011 and 2014. According to the various reports as well as claims by farmers’ unions, close to 1,25,000 farmers have taken their lives since 2000. The data shows that the number of suicides is increasing across the regions. Earlier, Western Vidarbha witnessed the majority of such cases. However, now, farmers from Marathwada too are committing suicides. The otherwise rich region of Western Maharashtra has also witnessed this crisis in the last three years.

Maharashtra has a large number of dams but due to their complete neglect they are unable to serve the people. As of 20th February 2019, all the dams in the state held less than 35% of their live capacity, as compared to 51% at the same time last year! Dams of Vidarbha and Marathwada region are the worst hit with less than 18% and 9% of their live capacity respectively! This means that even drinking water will not be available in the coming months!

This year the drought is so severe that due to shortage of fodder for the cattle, farmers are being forced to sell off their cattle at throw away prices. For example, a cow costing around Rs.70,000/- is being sold under distress at as less as Rs.23,000/-. The state government has opened only a few fodder camps and that too only for large cattle. Farmers and villagers are expected to take care of small animals like sheep and goat on their own, as if these small animals do not need any fodder! Small and marginal farmers, which constitute the majority in Maharashtra, can afford to buy only such small animals. They are thus hardest hit due to the fodder camp policy of the government. They are selling their goat or sheep for as low as Rs.4,000/- as against their purchase price of Rs.15,000/-.Once they sell off their cattle, it will be very difficult for such farmers to buy the cattle again at least for a few years, thus restarting the vicious circle of indebtedness! The Maharashtra government has still not started fodder camps in all the drought affected areas though drought was predicted in November itself.

The callousness of the state government to the conditions of farmers was again witnessed in the interim budget presented by Maharashtra government in March this year. While the budget declared various incentives to the tune of Rs.16,000 crores under the new industrial policy for big capitalists for setting up large scale industries, it made a provision of just Rs.2000 crores for drought affected farmers!

This is a grave situation not only for farmers and farm workers but for all the working people of Maharashtra since it will result in a severe drop in agriculture output which would lead to rise in price of all food items.

Sensing this as an opportunity, the Congress and Nationalist Congress Party are trying to woo the rural population. Their leaders are asking farmers to vote them to power, promising them salvation from all the ills. But, can farmers forget the fact that the same Congress and NCP had done precious little to safeguard their interests when they were in power? In fact many of the policies which have caused distress to farmers were implemented by the leadership of the Congress and the NCP at the center and in the state.

Neither the farmers nor other working people can rely on any of the parties of the capitalists. They should refuse to be pawns in their electoral games.

What is required is reduction of their dependence on monsoon rain. This can be done by optimization of water resources through various available technology and planning for a cropping pattern that conserves water. This system which serves capitalist interests is incapable of planning in the interests of the toilers and tillers.