Rail workers all over the country have been agitating against the 100 day action plan of the Railway Ministry which has proposed a number of steps aimed at accelerating the privatisation of Indian Railways. The privatisation of Indian Railways has been going on covertly for more than two decades despite the repeated denials by respective Railway Ministers and Prime Ministers. The 100-day action plan recently announced by the newly elected BJP government is an open declaration of this privatisation agenda.

Rail workers all over the country have been agitating against the 100 day action plan of the Railway Ministry which has proposed a number of steps aimed at accelerating the privatisation of Indian Railways. The privatisation of Indian Railways has been going on covertly for more than two decades despite the repeated denials by respective Railway Ministers and Prime Ministers. The 100-day action plan recently announced by the newly elected BJP government is an open declaration of this privatisation agenda. ​ 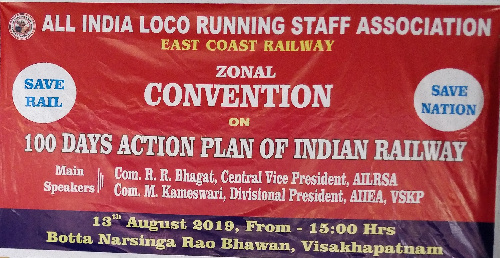 ​ The Communist Ghadar Party of India (CGPI) exposed the real plans of the ruling capitalist class for privatisation of the railways, in a pamphlet entitled “Unite to defeat privatisation of Indian Railways”, in 2018. Thousands of these pamphlets have been distributed among rail workers, calling for unity in the struggle against privatisation. The central organ of the CGPI, Mazdoor Ekta Lehar (MEL), which is read by many rail workers all over the country, has also been regularly reporting on this subject.

Recognizing the role Mazdoor Ekta Lehar has been playing in the struggle against privatization, the Visakhapatnam Zone of East Coast Railway of All India Loco Running Staff Association (AILRSA) invited it to its Zonal Convention at Visakhapatnam on 13 August, to make a presentation about rail privatization in the context of the 100-day Action Plan. More than 100 loco pilots attended the convention. ​ 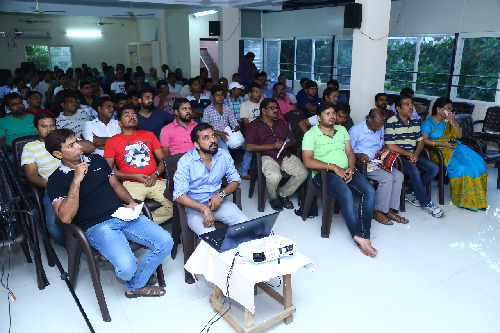 ​ Welcoming the participants, Com. S K Choube, Zonal Secretary elaborated on the various proposals of the 100-day Action Plan. He informed that the central body of AILRSA has decided to oppose the Plan which is in line with the recommendations of the Bibek Debroy Committee made in 2015 for unbundling, restructuring and corporatisation of railways. He called upon all to unitedly oppose this agenda which is against the interests of both rail workers and passengers.

Com. R R Bhagat, Central Vice President of AILRSA said the corporatisation of 7 production units is the first step towards their privatisation. With facts and figures he showed how each of the production units have been exceeding their production targets, producing most modern engines and coaches at much lower cost than imported ones. Questioning the need for their privatisation, he stated that the plan is to either close down or hand over 96 small and big workshops of Indian Railways to private operators. He elaborated on various privatisation measures already taken by Indian Railways, including of railways stations in the name of their modernisation and outsourcing of work of nearly 80 departments. The number of permanent workers has been brought down to 12.56 lakh while nearly 6 lakh contract workers are employed. The plan is to bring down the permanent workforce to 10 lakh, he warned. He declared that along with the opposition of privatisation we have to also demand the withdrawal of the New Pension Scheme and the restoration of the old one.

The presentation of MEL started with the explanation of the rail privatisation strategy of the government. As Indian Railways is a department of the government, it cannot be privatised. That is why various activities have been taken out one by one and carried out under separate corporations such as IRCTC, IRFC, IRCON, CONCOR, KRC. Now the process of selling these corporations part by part has begun. Next, every new activity has been done outside of Indian Railways and thus corporations like MRVCL, RVNL, DFDC, HSRC, DMC, etc. have been created. Whatever activity could not be separated easily has been outsourced by calling it a ‘non-core’ activity.

The privatisation of Indian Railways began soon after the announcement of the New Economic Policy of Globalization through Liberalization and Privatisation in 1991 by setting up Prakash Tandon Committee in 1995. After that a series of committees like Rakesh Mohan Committee (2001), Sam Pitroda Committee (2011), and Bibek Debroy Committee (2014) were set up in the name of improving rail functioning. However, each committee gave further push to privatisation by dividing all activities into ‘core’ and ‘non-core’, promoting PPP model of privatisation, recommending complete corporatisation of railways and asking for railways to become just a track owning company and leave all train operations for capitalists.

The next big phase of the strategy is to declare Indian Railways a “sick enterprise” so as to justify its complete privatisation, as is being done in case of Air India, MTNL, BSNL, etc. The plan is to hand over running of both goods and passenger train on profitable routes to private operators and force Indian Railways to run loss making routes. Profitable goods traffic will be moved to Dedicated Freight Corridor Corporation and the 100-day Action Plan envisages handing over running of passenger trains like Rajdhani, Shatabdi, etc. to private operators. All high speed passenger trains are already planned to be operated by the High Speed Rail Corporation.

The 100-day action plan envisages removal of all subsidies on passenger fares. This will lead to a big rise in fares, and make the running of these trains more profitable for the private capitalists. The removal of subsidy on passenger fare will also enable railways to reduce fare for goods movement, which has been a long-standing demand of capitalists.

The presentation stressed on the point that the government of India is duty bound to provide affordable safe and comfortable rail travel to all Indians. However, if subsidies on passenger fares are removed, a large part of the country and its people will be deprived of rail service.

Thus, the importance of mobilising the crores of passengers of Indian Railways against its privatisation was emphasised, in order to strengthen the struggle of the rail workers.

The presentation explained that Indian capitalists are looking for new avenues for making profit to come out of the present crisis. Declaring profitable public sector enterprises as “sick” and selling them off to the highest private bidder is one of the ways they have been adopting. Every such attempt of the ruling class must be vigorously opposed.

The presentation concluded that privatisation of Indian Railways is being carried out at the behest of the Indian and foreign capitalist monopolies. It is being implemented by successive governments headed by parties like the Congress and BJP. Changing political parties in power at the Centre has not stopped privatisation. If anything, every succeeding party in power has pursued this agenda more vigorously than before.

The presentation called for strengthening the fighting unity of all railway workers with the entire working class, in order to defeat this anti-worker, anti-social and anti-national program. The fight against privatisation has to be the agenda of the entire working class. We have to oppose every single attack of privatisation, whether in railways or in any other sector. We have to support the struggles of workers of other public sectors and also seek their support for our struggle. It was pointed out that workers of 46 ordnance factories have planned a month long strike this month against the plan to corporatize all the ordnance factories into a single corporation. Rail workers should stand in solidarity with them. It is the unity of rail workers, the unity of all public sector unit workers and of the entire working class which is required to deal with the attack of privatisation, it was emphasised.

The programme ended with enthusiastic applause for Com. Choube’s declaration that the fight against privatisation in general and the 100 Day Action Plan in particular would be intensified.