On 14th February, hundreds of women, youth, students, teachers and other citizens held a candle light march from Jamia Millia Metro Station to Jamia Millia Islamia University campus, to mark one year after the death of CRPF security personnel in a terrorist attack at Pulwama on the Jammu-Srinagar Highway. 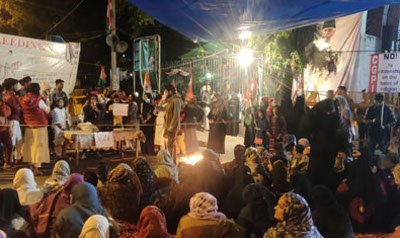 The participants in the march carried placards denouncing the attack on the CRPF personnel. They held banners and placards opposing the CAA/NRC/NPR and the efforts of the state to break the unity of our people by linking citizenship to religion, the brutal attacks on the students of Jamia Millia Islamia University, JNU, AMU, etc. They marched in a peaceful and disciplined procession, culminating in a mass rally at Jamia Millia Islamia University campus.

A memorial to the CRPF personnel killed in the terrorist attack had been set up at the rally site, decorated with candles and flowers. The proceedings of the rally began with a two-minute silence in commemoration of the killed security personnel. Several young children, youth and women came forward to present poems that they themselves had composed, stories and songs, highlighting the unity and solidarity of our people and denouncing the efforts of our enemies to break our unity.

Comrades of the CGPI addressed the rally, along with activists of other political parties and organisations, youth, student and women activists.

Speakers said that the people of our country are still demanding answers to numerous questions regarding the terrorist attack on the security personnel at Pulwama – why the convoy was travelling without requisite security on a highway prone to such attacks, why there was such a high degree of intelligence failure on the part of the state agencies, etc. They denounced the state terror and hate campaign that was launched immediately following the attack. The Pulwama incident was utilized blatantly by the ruling BJP government to portray all Muslims and particularly Kashmiris as “terrorists” and “anti-nationals”. Speakers recalled the vicious state organized attacks on Kashmiri students and people in different parts of the country, carried out by bloodthirsty goondas fully aided by the police. They recalled how heads of educational institutions were pressurized by the state and its agencies to deny Kashmiri students admission in their institutions.

Speakers denounced the systematic policy of the state targeting Muslims as “traitors”. They highlighted the mass protests in this city and across the country, against the CAA/NRC/NPR, where people are being discriminated against and their citizenship doubted on the basis of their religion. “We are one people!”, “We resist all efforts to divide us!”, “Withdraw the CAA, stop the NRC and NPR process!” – these slogans resonated at the protest site.